At: Pleasance One (Venue 33), The Pleasance, Edinburgh

Manchester’s Award-winning Hope Mill Theatre is set to makes its Fringe debut with Classic! a new comic play, that races through a multitude of classic novels in 60 minutes. At lightning speed and utilising multiple costume changes, Classic! races you from Black Beauty to Wuthering Heights via Moby Dick and many, many more …

Classic! has been written by Coronation St and Emmerdale writers Lindsay Williams and Peter Kerry and is directed by actor and director Joyce Branagh (recently seen in Oscar winning film Belfast directed by her brother Kenneth).

A cast of 6 (Louis Blair, Althea Burey, Amy Drake, Amy Gavin, Robin Simpson and Gareth Tempest) will romp through all those classic novels you never had time to read at Pleasance One from 3-28 August.

The play is set around a group of actors coming together to break a record for the most novels ever shared on stage. In doing that, they share the stories in extremely unexpected ways: Moby Dick becomes a sea shanty, Jane Eyre is a silent movie, Oliver Twist is a film noir and Black Beauty a pantomime… and that’s just scratching the surface!

Joyce Branagh said: ‘I’m so excited to finally get CLASSIC! on stage - we first did a chunk of this in Manchester years ago and to now have a full show in 2022 is brilliant - definitely worth the wait!  The script is hilarious - really snappy - and we’ve got a great bunch of experienced comedy actors, so the whole thing is going to be very VERY silly. Emily Bronte, Charles Dickens et al will be disco-dancing in their graves!’

Joseph Houston, Artistic Director of award-winning producing house Hope Mill Theatre, said:‘Hailing from Scotland, the Edinburgh Festival has played a big part in my life and I have many happy memories of seeing variety of shows. Being able to now be a part of the festival with a Hope Mill production, in what will be a very special year and its triumphant return, is a dream come true. From the minute we read CLASSIC! we knew this was a show destined for Edinburgh, with its fast paced, funny humour and a top-notch group of actors, you will never need to read another classic novel again!’

Hope Mill Theatre was founded in Manchester by Joseph Houston and William Whelton in 2015. Since then it has firmly placed itself on the northern map for its ambitious in-house productions including UK, European and World premieres, many of which have transferred to London and toured. Their 2021 revival of RENT received rave reviews from critics and audiences alike and won the What’s On Stage Award for Best Regional Production. 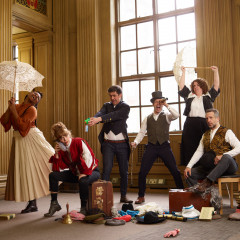