When Fame slides into your DMs, what would you do?

Warning, recommended for 18+: This play deals with consent and has adult themes of a sexual nature (and implied sexual misconduct). There is a scene which involves nudity.

The Collab is a new show debuting at London's The Space Theatre, written by Lauren Morley.

Ella Blair is a rising star in the online video scene. Together with the help of her friend, Kat Daniels, a budding fashion photographer, Ella's building a platform around sustainable fashion. When an opportunity arises to "collab" with superstar influencer Max Jessup on his latest video art project, Ella jumps headlong into it...but at what cost? Aequitas dives into a multimedia look at fame, friendship, and the #MeToo movement in the online sphere. The Collab is a look at the world of art and online video, consent, and the grey areas we still need to define.

“I’m not interested in portraying how she was ‘exploited,’ okay? … If all of what people get from this is ‘erm, why’s she naked and they’re all suited up, that’s so threatening!’ then you’re missing the entire bloody point of your own project.” - Lauren Morley

Writer, Lauren Morley is a Finnish-Canadian playwright and performer based in London. She has recently written with Soho Theatre in their Writer’s Lab and Alumni Group, and performed in world-class venues across Canada and Europe. Lauren’s first play, Hope and Her Children, was longlisted for the Women’s Prize for Playwriting, Theatre Royal Haymarket’s Pitch Your Play, and the Verity Bargate Award. The Collab is her first commissioned and produced play

Louise Lord (Ella), an actor and actor combatant from West Sussex, is super excited and thrilled to be portraying ‘Ella’ in Aequitas Theatre Company’s production of The Collab. Since graduating in 2020, Louise has appeared as ‘Little John’ in the Hawth’s production of Robin Hood, ‘Cassie’ in Solomon Theatre Company’s UK tour of Last Orders, as well as short films with companies such as Forgotten Birthday Films & Brighton Film Academy. She is also currently in production of her upcoming film ‘Rule Three’ which she has written & produced. Alongside acting, Louise is passionate about bees and hopes to one day own her own hives and become a beekeeper.

Andre Frey (Max) is a young Mexican-German actor with a highly international upbringing, having lived in countries like the US and France. Therefore, he speaks Spanish, French, German & English at a native level. Andre has furthered his training and career in various institutions & cultures. With experience in theatre, screen, musicals & more, he is passionate about every dimension of acting. Now settled in London, Andre wishes to embrace the city’s international nature and high regard for public performances.

Maria Eastwood Krah (Kat), is a 19-year-old Filipino-Ghanian British actor and singer who utilises her culturally diverse upbringing as inspiration to embody a variety of roles.  She moved to London in 2021 following a two-year Professional Acting Diploma at Bristol Old Vic’s Boomsatsuma School in Oxford and has since studied at The Unseen and Identity School of Acting in London while working on commercial and theatre acting roles, as well as songwriting. She has acting experience in radio and in theatre productions in Oxford as well as London, including playing the lead role for Lysistrata at Soho House Theatre in 2021.

Aequitas creates theatre that represents and comments on our ever-changing world. Past productions have mashed technology with theatre in work that looks at sociopolitical aspects of today. Aequitas is made up Rachael Bellis and LaTanya Peterkin. The company is committed to equality and justice and is named after that principle in Greek philosophy. Aequitas works with artists of all backgrounds and is committed to casting diverse and accessible. 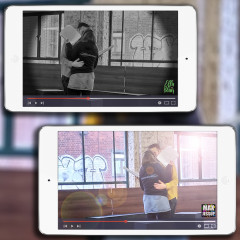 When Fame slides into your DMs, what would you do?