Whether he’s playing master of ceremonies at a Libertines show in front of 5,000 screaming rock fans or reciting Georgian ballads down your local, Luke Wright is adept at taking poetry to places it doesn’t normally go. His poems can be tender, riotous, caustic and romantic and he delivers them with the ferocity and panache of a raconteur at the top of his game.

Now Luke is preparing to tour the UK in 2022 with a show of new poems but before then he’ll preview them in two shows at his ‘home’ venue Norwich Arts Centre on 30 November and 1 December.

This is an ALL-NEW show for with deliciously funny poems set against a backdrop of pandemic politics, ageing parents, and an endless, droning culture war, Wright throws a squat party in his ‘poor old heart’, featuring a cast of murderous swans, sozzled devils, and the people we most want to protect.

For 20 years Luke has toured the world to perform his flamboyant, political and riotously funny poetry. In March 2020 all that came to a halt. He has now emerged from his temporary enforced retirement with an infectious thirst for life. But what kind of life? And does it bear any resemblance to the one he had before? ‘His performances rumble with rage, passion and humour.’ Guardian

In early October he received a standing ovation opening for John Cooper Clarke at St Andrews Hall and in September he presented ‘Contains Strong Language Live’ for BBC Radio 4.

He said ‘usually I spend much of the year touring around the world so the pandemic lockdown’s gave me time to reflect more and think about how the pandemic has affected people from all walks of life. It’s going to be a thrill to take this new collection of poems on tour and I wanted to give Norwich audiences the opportunity to hear them first. Norwich Arts Centre and it’s wonderful audiences have always been so supportive to me.’

No less a personage than Patti Smith praised his ‘cool poems’ and Carl Barât of The Libertines said ‘Luke is one of the greats. A poetic pugilist. Beguiling and hypnotic.’

Luke Wright is one of the UK’s most riveting spoken word performers, delivering his poems with intensity and charisma. Keenly personal but always inflected with irreverent humour, his poetry is always based on his life - as a poet, a father and a son. He is acknowledged as one of Britain’s top poets and one of the principle architects of the now thriving UK spoken word scene.

In 2020, when mostly confined to his home he was dubbed ‘the bard of lockdown’ by The Daily Telegraph for his marathon stint of 100 consecutive nights of online shows.

His latest book, The Feel-Good Movie of the Year is out now from Penned in the Margins. He is the winner of a Fringe First, a Stage Award for Acting Excellence and In May 2021 he won a richly deserved third Saboteur Award, for Best Spoken Word Performer.

‘Fierce, wistful, romantic and witty. A sensational hour of poetry’ ***** The Stage 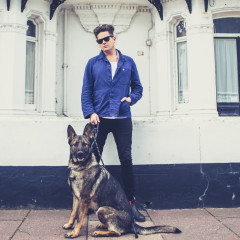