Jayden has been involved with drama at the Customs House for approximately three-and-a-half years and is now a Senior Drama Facilitator and Practitioner.

As part of her Gold Arts Award she planned, directed and devised an entire section on the 2015 NT Connections play. Jayden also led Drama Bairns, a group for children under seven, gaining experience as a drama facilitator.

Jayden took up a place on the BA (Hons) in Drama at the University of Sunderland. She is now in her second year. In September 2016, Jayden was appointed as Director of Customs House Jnr Youth Theatre. Jnr Youth Theatre is for performers aged 11 to 15 years old.

Jayden's experience of performing, stage management and technical aspects of theatre as well as her Gold Arts Award and current degree studies are inspiring the latest cohort.

In January, several members of Junior Youth Theatre, working towards their Explore Arts Awards, opted to research Jayden as a creative practitioner. They found out Jayden aspires to either become a stage manager or work in a technical team.

Her experience puts her on a strong footing to achieve her ambition.

How did you discover Arts Award?

I'd heard about Arts Award at a musical theatre group I used to attend but didn't really start my Arts Award Journey till I came to The Customs House when I was 14.

From looking at your interests, you work across many different art forms. What is your main art form and which other art forms did you cover in your Gold Award?

My main art form has changed over the past few years. It used to be acting, however it is now being a drama facilitator as well as technical roles. I covered facilitating in my Gold Arts Award; devising a performance and teaching toddlers.

Who are your arts heroes?

Kerry Ellis inspired me to become an actress, however if it wasn't for Fiona Martin and the staff at the Customs House, I wouldn't have had the opportunity to facilitate.

When did you realise you wanted to be a stage manager or director?

During my second year of A-Level Performing Arts, I had to take on a production role and put a performance together with the class being the production team. I was the stage manager and I also directed the piece, which was Hairspray, and ever since then I have wanted to explore this as a career.

What was your biggest challenge in doing your Gold Arts Award?

Making sure I finished it alongside my A-Levels and trying to find new and exciting ways of facilitating and planning sessions.

I would like to either complete a postgraduate degree in Stage Management or Directing, or start an apprenticeship technical theatre. Possibly moving to London to do this.

What would you tell someone thinking of starting their Arts Award journey?

Do it. It's so beneficial and allows you to develop your skills in many ways. It's a brilliant qualification to have and really stands out on your CV and, most of all, it's fun while you're completing it so that makes it even more worthwhile! 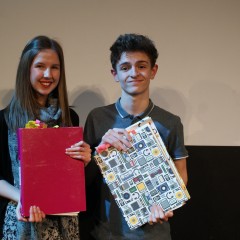 Jayden has been involved with drama at the Customs House for approximately three-and-a-half years and is now a Senior Drama Facilitator and Practitioner.