Fahima Khatun completed her Silver Arts Award at BFI Academy. Here she describes her experience, and discusses how it has helped her in the art world.

Arts award allowed me not only to gain a Level Two Silver Arts Award, but I also gained a lot of experience. I met so many other people my age who have similar career choices as me and I thoroughly enjoyed learning and gaining many different skills.

We made a short Film and went to events such as The Bicycle at the Electric, which I wrote a review for. We also went to The Blue Hippo Studio for editing and we set up our own Workshop. You can find all these events here.

Working with Drew Roper was a huge privilege; he taught me so much I did not know about. I chose animation on a bit of a whim; it's not anything I ever considered going into, I always thought live action was what I would do. But working alongside Drew at his studio (Yamination Studio), as well as those who worked with him, was something I'm glad I did. He was really helpful and kind and great teacher who taught me a lot of things, as well as other students who were with me. One of those was about cameras. I knew very little about cameras, I knew how to work one but I didn't know much about lenses or how to put them on and he taught me. It wasn't like school, he didn't just tell me and do it himself, he told me and made me do it as well as occasionally putting me on the spot in front of the others, which really helped me remember. During my time I was the Producer in the animation group which made me realise I could go into animation and is one of my choices now. As I definitely know I want to be a Producer and I feel in order to be a good producer you must be able to get your head around other job in making movies/animation/TV show and working with Drew allowed me to gain the knowledge of Camera and other equipment needed to make animations. Drew wasn't just a teacher he was more of a shadow that only came into play if we needed him. He showed us how to be independent. I was not expecting to actually work with kids my age alone and actually make the animation ourselves, I thought there would be a bigger hand helping out, but Drew taught us how to be more independent and rely on ourselves as well as our fellow crew. He was a wonderful person to work with and really helped me increase my strength and face my weakness. Before Drew helped me I would never have bothered with cameras and left it to the professional. But now I don't feel that I can tell you everything about a camera, but I know a lot more than I use to and feel a lot more confident.

I recently made a short film which I have entered in a competition. I felt a lot more confident when making this film - not including the short film we made with the BFI, it is definitely my best work, which I did independently with my team. As well as entering it in a competition, it won an award from my college. I felt more confident when making the short film; I played a lot more with angling and effects than I had before, creating a better visual image for the audience. I was more pleased with my choices in the shoot and felt that I was more organised and was able to perform better when creating the short film as I used the skills gained from being an animation producer while working with the BFI Academy.

Meeting people already in the industry and working alongside them was very inspiring. They were all inspirational in their own way and taught me so many things. Such as working with BAFTA winning director Michael B.Clifford. Being able to say that is a huge privilege and makes me want to work harder so one day I could win my own awards and help other kids who were like me, wanting to work but not being given the opportunities. By doing this I have gained so much and am now inspired to do more and gain more experience.

The entire experience alone was a challenge in itself, I was very scared, I knew I would be working alongside other budding film and Media students, who were probably better than me, which made me very nervous and I had very little experience with equipment and working with known people, but I felt I took the challenge well, as I tackled many of my weaknesses.

Experience was the most valuable thing, definitely experience. Allowing me to make a short film then watch it on a cinema screen was brilliant. It gave me confidence and seeing my name in the credits as Animation Producer really helped bring my dream to reality and pushed me to want to carry on.

My next step is University and while in University I will branch myself out there more, carry on filming no matter what the job. Arts Award was a huge help, it was my opening line in many of my interviews and showing University lecturers the short film we made and seeing their reaction was the best feeling. It is something I've definitely added to my personal achievements.

Everyone who helped in their own way was wonderful and very inspirational, but if I was to choose one I'd have to say Drew Roper was my main inspiration as he helped me work on my weakness. 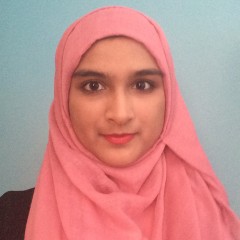 Fahima Khatun completed her Silver Arts Award at BFI Academy. Here she describes her experience, and discusses how it has helped her in the art world.