TrinityTalent celebrates Gareth Cheney for his achievements in Drama. He was selected for a Special Mention.

15-year-old Gareth Cheney was nominated for the TrinityTalent Class of 2021 for Drama and was selected for a Special Mention. He completed Trinity Communication Skills Grade 6 in 2021. In working towards his exam, Gareth was supported by Heathfield Youth Drama. He remained motivated and dedicated throughout the process, working more independently than usual across all tasks involved in preparing for his exam.

Gareth was nominated for Trinity Talent by Principal Mary Pearson, LGSM of the South East Performing Arts CIC,who said: “Gareth came to us aged 12. He suffered from a number of complex learning difficulties. Gareth never ever gave up and obtained 89 marks (Distinction) for his Grade 6 Communication Skills exam,a considerable achievement. With the help of his Drama and Communication Skills progress, he has achieved a place at a college. As his mother remarked, “he’s not the same boy that came to you, aged 12”.

The Trinity Talent panel said: “Gareth achieved a very high mark in Communication Skills, which is an incredible achievement in itself, and he should be celebrated in particular given the challenges he experiences with communication. Given the context of 2021 being a very personally challenging time for Gareth, this is an even greater achievement.”

How do you feel about being selected to be part of TrinityTalent Class of 2021 and being recognised in this way?

I feel extremely proud of myself to be selected to be part of TrinityTalent Class of 2021. The past couple of years I have worked extremely hard because I have moderate learning challenges, so to be selected proves I can do things that people said I wouldn’t be able to do.

How do you feel you have developed creatively and artistically in 2021?

What impact did your Trinity qualification have on your artistic development?

Being selected has encouraged me to work harder at my drama studies, exams and performances. It has also shown me that hard work and determination always pay off.

Has taking part in a Trinity qualification helped you to develop wider skills, such as communication skills, creativity or confidence?

I have found that my confidence has come on in leaps and bounds. As a boy, I was very shy and was scared to get involved, but now I’m no longer scared to get involved. I have found that my communication skills have improved. At the moment, I am a part of the Air Cadets and my communication skills have reached far into my life as a Cadet. I like to help the newer cadets and show them how things are done. Through cadets I’m doing my DoE award, and for the skills element of the challenge I am using drama, so this nomination will help me get one step closer to completing my DoE award. I also find I am a lot more confident, not just in the Cadets but also in my other hobbies and at school.

What are the next steps for you artistically and creatively in 2022?

At the moment, I’m in the application process for colleges, but I will continue with drama on a Friday night at my drama club. Hopefully, I will be doing a Musical Theatre exam at some point this year.

What are your longer term aims, for example for your future studies or work?

When I have left college I would like to work with children with special education needs. And my drama and performing arts skills will play a huge part in that.

Have you got any advice for other young people working towards a Trinity qualification?

Don’t give up. It took me four years to get where I am today in drama. It wasn’t easy at all, and there were times I wanted to give up, but with constant support from my drama teachers, family and friends, they didn’t let me. If you fall at the first hurdle, don’t just give up, but get up and try again. Hard work and determination always pay off.

Is there anything creative you’re currently working on you’d like to tell us about?

Currently, I’m working on a festival piece with five other members from my drama club, and the play we are doing for the festival is called Gosforth Faint.

Read more about the talented young people selected to be featured as part of the TrinityTalent Class of 2021. 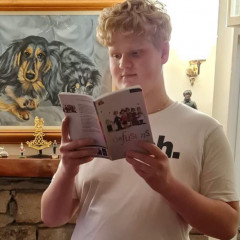 TrinityTalent celebrates Gareth Cheney for his achievements in Drama. He was selected for a Special Mention.