Chimamanda Ngozi Adichie provided a gripping fictionalized account of the Biafran war in her novel Half of a Yellow Sun, one that introduced many to a pivotal moment in modern African history.

Chimamanda Ngozi Adichie was born in the Igbo area of Eastern Nigeria. Her grandfathers fought and died in the Biafran war, a conflict which saw a largely unified Igbo nation attempt to secede from Nigeria in 1967.

It is clear that her 2006 novel Half of a Yellow Sun had a large amount of personal relevance to Adichie. She extensively researched the conflict before writing it, through eyewitness testimonies and academic texts. As such, much of the novel is textured in the same vein as a work of historical fiction. Dates, locations, and figures can all be traced to accurate sources.

Adichie’s novel focused on several individuals with differing backgrounds and their relationship to the war as it unfolded. The story is told through three central characters, Ugwu, Olanna, and Richard. They begin the novel in relative comfort, but as their lives become intertwined with the conflict they witness, and sometimes participate in, the harrowing circumstances of war.

The characters are distinct, and as perspective shifts between them so too does the style of writing in subtle but impactful ways. These changes in style are often representative of the differing perceptions of the world that separate each character. Olanna is empathetic but practical, and through her eyes the world becomes complex and layered. Ugwu is uneducated but intelligent. He spends much of the novel being pulled along by other characters, the tone of the writing becomes passive and observatory during his sections. He is likeable at first, particularly because his is the perspective we begin with, but as he grows up during the conflict, his path takes a dark turn, one that drives home the representation of war as a moral quagmire.

The echoes of colonialism resonate within the story. From the very beginning, Ugwu’s employer Odenigbo discusses the essence of post-colonial Nigeria, rejecting Pan-Africanism and believing that all traces of colonial society must be eradicated before Igbo culture is able to reassert itself. His ideas are often debated by his peers, and even he himself struggles to reconcile his Western education with his principles. He asks how can they reject the exploitation and ruinous remnants of colonialism without using the tools of the coloniser.

When looking at how Adichie defines her relationship to the English language, it is clear that Odenigbo’s question had real relevance to questions the author herself had. On several occasions, she has been asked why she did not write her novels in Igbo. To this she replies:

“I’m not sure my writing in English is a choice. If a Nigerian Igbo like myself is educated exclusively in English, discouraged from speaking Igbo in a school in which Igbo was just one more subject of study (and one that was considered ‘uncool’ by students and did not receive much support from the administration), then perhaps writing in English is not a choice, because the idea of choice assumes other equal alternatives.”

She goes on to argue that to reject English as a literary language would be to force a limitation on the Nigerian literary experience. Igbo suffered under British colonialism, and is limited as a written language because of how pervasive the colonialist agenda was throughout Nigeria. Adichie once stated that “English is mine”, explaining that because she spoke it alongside Igbo, her use of it does not reflect an Anglicised experience, but rather, her own personal one.

The full interview in which she discusses these questions can be found here.

Header Image Credit: "Half of a Yellow Sun" by clurross is licensed under CC BY-NC-ND 2.0 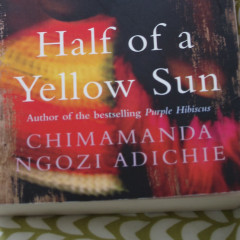 Voice Retrospects: Half of a Yellow Sun

Chimamanda Ngozi Adichie provided a gripping fictionalized account of the Biafran war in her novel Half of a Yellow Sun, one that introduced many to a pivotal moment in modern African history.