As the leaves yellow and October nears, join Voice in reminiscing about 2014’s Over the Garden Wall, an animated miniseries that is well and truly made for this time of year.

“Somewhere lost in the clouded annals of history lies a place that few have seen — a mysterious place called the Unknown, where long forgotten stories are revealed to those who travel... through the wood.”

Over the Garden Wall opens with its two protagonists, Wirt (Elijah Wood) and Greg (Clive Dean) wandering through a forest. The younger of the half-brothers, Greg, lists nonsensical potential names for his pet frog, whilst Wirt waxes poetic about their situation, the first of many angsty speeches from the nervous teen. It quickly becomes apparent that the world they have stumbled into is perilous. They encounter a woodsman (masterfully voiced by Christopher Lloyd) who frantically warns them of the Beast, an entity that robs lost travellers of their hope and consumes their souls.

Not for nothing is Over the Garden Wall considered the ideal autumn watch. Its style is that of Southern USA in the late 1800s, with riverboats and petticoats galore. Something about that era is just inherently creepy, and when you combine that with the deep browns and ambers of the colour scheme, along with the surreal character designs, the world of the Unknown feels like a love letter to the classical Americanised Halloween.

Despite its American gothic atmosphere, the show is far from dreary. The main trio of Wirt, Greg, and Beatrice the bluebird (Melanie Lynskey) have a perfectly balanced dynamic, with Wirt in particular undergoing surprisingly well-depicted character development as the series progresses. What keeps the characters charming however, is the humour that surrounds them. Greg is the standout. His unwavering optimism and quirky understanding of the world around him leads to a lot of conflict between him and his more straight-laced brother, but serves as a pathway for the audience to become invested in the otherworldly side-plots.

It’s also deadpan as hell, the best jokes are delivered with absolutely zero qualms about overdosing on irony. When Beatrice tries to convince Wirt to steal from a nobleman, she reminds him “we stole a horse”, to which he replies “Fred is a talking horse, he can do what he wants”, after which Fred pipes up with an earnest look on his face and says “I want to steal.” It's worth watching the show for that scene alone.

A lot of the comedy stems from the unwritten rules of the world. The Unknown is governed by unknowable logic, much in the same way dreams are. Even the protagonists forget to question the bizarreness after the first two episodes. Nothing is ever as it seems, friends and foes merge and switch places during the events of each ten-minute long episode. Often, some dire threat is revealed to be a misunderstanding, a sheep in wolf’s clothes. There’s something pleasing about this fairytale logic. Growing up, many things seem scary and impossible to comprehend, it’s nice to see a show that tells kids this is normal, and that more often than not these unknowable things aren’t so scary once you understand them. Even the mistakes the main characters themselves make, which seem so daunting or unforgivable at first, fall to the side with simple apologies or acts of kindness.

Tying together the show's meandering plot is a number of songs, written in the style of early 20th century Americana. Jack Jones, the voice behind the opening theme and a pivotal song in the later episodes has a rich voice with textured vibrato that drips with tonal significance in his two numbers. The musical moments are rarely longer than a minute, serving more as atmosphere-makers rather than plot points. The highwayman’s song epitomises this. It interrupts a generally lighthearted episode with a jarring, visually unsettling chant about “making ends meet.” It has nothing to do with the rest of the story, but places a nugget of disquiet in the back of the audience’s mind. Another stand out vocal performance comes from bass-baritone opera singer Samuel Ramey, whose somber and brooding tones lend themselves well to the show's primary antagonist, the Beast.

The Beast is an exceptional antagonist. His twisted relationship to the woodsman and the Edelwood trees build in dread as the series reaches its climax. The final confrontation between him and Wirt is as subversive as it is thematically essential.

Over the Garden Wall is a celebration of that childlike feeling of being lost. Engrossing, sinister, funny, and ultimately reassuring, it’s a staple of autumn viewing. 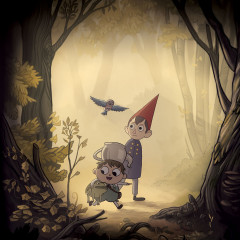 Voice Retrospects: Over the Garden Wall

As the leaves yellow and October nears, join Voice in reminiscing about 2014’s Over the Garden Wall, an animated miniseries that is well and truly made for this time of year.