Voice rounds up some of our favourite (or not so favourite) weird traditions.

Weird traditions are an important part of culture, either imbued with hidden meaning or just downright daft, they can allow you to understand and bond with your region’s culture or bond with someone who’s just as perplexed as you that they grew up doing that weird thing too. Here at Voice we’ve picked some weird traditions that we’ve grown up with or heard about to baffle and amuse.

A house-visiting wassailing tradition from around Wales that features Mari Lwyd – a horse’s skull, bedecked with ribbons and bauble eyes and wearing a white sheet – being paraded through town, calling at houses and requesting entry through the form of song. The homeowner must then deny Mari and her cohorts entry, also in the form of song. A call and response continues between Mari and the homeowner, with the homeowner potentially eventually relenting and allowing Mari and her companions entry, in which case they will be given food and drink. The earliest published account of the tradition is from 1800, though it may have been around for longer. It saw a decline in practice somewhat but was revived in the mid twentieth century and is still practiced in some places today. Although a looming horse’s skull might seem like a somewhat sinister image, there is something rather charming about Mari, and she has often been the subject of art and pop culture in Wales in recent years.

What I knew as ‘the birthday bumps’ growing up was the mortifying ordeal of being taken to the front of assembly in primary school on my birthday, and being punched in the arm by my headteacher, a punch for each year I’d been alive and one extra “for luck”. Apparently, ‘the birthday bumps’ most commonly refers to the process of being taken by the arms and legs and ‘bumped’ up and down in the air by friends or family, and is a custom in the UK, Ireland, India, and Canada. Neither sounds fun but I still find it particularly odd that the birthday bumps I grew up with were almost written in school law and administered by our headteacher, a gruff but usually friendly old man who probably definitely shouldn’t have been punching children. The punches were thankfully always very soft and didn’t hurt at all, but you weren’t really allowed to get out of them either. Mr Griffiths, if you’re reading this, what’s your damage man?

The Netherlands is no stranger to weird traditional celebrations, one of the weirdest is the birthday celebration for someone who is turning 50. Friends of the person will decorate or prank those celebrating with old men and women, supposed to mimic their mates getting older. Stranger still, Dutch people also give those turning with an inflatable version of themselves, named either Abraham or Sarah, depending on the sex of those celebrating. The doll is marked with a signpost of the age in bold (Maybe to stop people getting freaked out by the inanimate elders), and the tradition continues each decade thereafter, with the dolls both aging each time and their names changing too. The tradition is born from the Bible, specifically John 8: 56-58, where Jesus is told that he can't see Abraham until he turns 50 (Sarah is Abraham’s wife). The Dutch may have taken the passages a little too literally, but the tradition is an interesting one nevertheless.

Probably one of the strangest traditions that England and indeed the UK has to offer is, of course, cheese rolling. The tradition is a Gloucestershire staple, bringing in many tourists every year, all clambering to partake in the ridiculous festivities at hand. Those festivities happen to be running (or violently tumbling) down the incredibly steep Coopers Hill, chasing after a wheel of the finest local Double Gloucester cheese. The event was traditionally held by and for the local village of Brockworth, and the first written evidence of the spectacle can be traced back to 1826. Now, people from all over the world come to compete. The winner gets to take home the very cheese that they almost broke their legs chasing, after said cheese has flown down the hill at speeds reaching up to 70mph. Competitors and spectators alike are known to get seriously injured at the event, which has seen much scrutiny due to health and safety over the years, but cheese rolling remains, and the locals will never let it end.

What better way to start a new month full of possibilities than finding as many fellow classmates as you can and inflicting bodily harm! While, of course, hoping they don’t feel the same way inclined. Although while I was growing up it felt like a very British tradition, it apparently originated across the pond in America with George Washington. During his Presidency, on the first day of each month he would meet with Indian tribes and supply them with fruit punch with an added pinch of salt. This became known as ‘pinch punch on the first of the month’. Why that then translated to physical violence I couldn't tell you but it was a staple in my school. 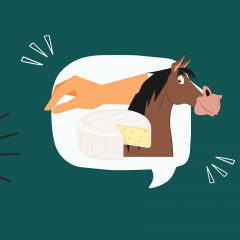 Voice rounds up some of our favourite (or not so favourite) weird traditions.