Voice MagBlogsThe importance of be…

How the harpist and composer changed jazz forever

Dorothy Jeanne Thompson was born on 6 August, 1963, in Detroit, Michigan. From an early age, she was surrounded by a musical atmosphere where jazz had a special place: her father, Wiley Thompson, was a jazz guitarist and would often bring home some of his fellow musicians from the Detroit jazz scene to play. Dorothy, a very young pianist at the time, would play with them providing background for their improvisations. In high school, she developed her musical skills by playing multiple instruments such as the saxophone, piano and string bass. She attended Cass Technical High School, with some who would become, like her, big names in the jazz world – such as Donald Byrd and Kenny Burrell. Later, she would take the next step in her musical career when she attended Wayne State University to study piano and music education. By that time, she was already an accomplished musician, and was already playing her way through the jazz clubs of the 50’s on the piano and eventually the harp, which by 1952 would become her main instrument.

Shortly after graduating, Ashby began exploring the possibilities of including the harp as a primary instrument in jazz works. At first, her colleagues weren't very fond of the idea; the general thought was that this instrument belonged only in the classical music world. Determined as she was, Ashby set about creating a space for the harp by offering free concerts and playing gigs with her trio. By 1960, she managed to have her own radio program, where she would perform live with her husband and chat about music. Soon, she began recording with some of the most recognized musicians of the moment, such as Louis Armstrong, Woody Herman, and Frank Wess, and by 1957, she released her first LP, The Jazz Harpist. This album, in which well-known musicians participated, included both standards and original compositions of hers. Although it was received well by critics, the album did not have good commercial success. Undeterred, by 1958, she released Hip Harp, an album that would become one of her bests. Ashby's versatility and musical knowledge allowed her not only to perform jazz but also to flourish in bebop, soul, bossa nova, and free jazz improvisation (like her contemporary Alice Coltrane). This was a key to the exploration of some new and fascinating fusions and enriching her music. Among her contributions to jazz and music, there is not only the popularization of the harp outside the classical environment but also of the Japanese koto; and this was possible through her album The Rubaiyat of Dorothy Ashby, certainly more appreciated today than it was at the time. When asked about her career in an interview with W. Royal Stokes for Living the jazz life magazine in 1983, Dorothy said: "It's been maybe a triple burden in that not a lot of women are becoming known as jazz players. There is also the connection with black women. The audiences I was trying to reach were not interested in the harp, period—classical or otherwise—and they were certainly not interested in seeing a black woman playing the harp."

The Ashby players: an influence in music and theatre

Dorothy and her husband, John Ashby, were very enthusiastic and curious about learning new things and extending their range of talents. In the 1960s, they founded a theatre company called The Ashby Players, producing plays with subjects relevant to the black community of Detroit. The company was, at the same time, a branch of the Aid to the Creative Arts Organization, founded in 1962 by the Ashby's, whose objective was to fund scholarships. During the time the company was running, the couple worked together; John wrote the plays, and Dorothy wrote the scores. The Ashby Players offered performances across the US and Canada, giving the opportunity to black actors to star in their plays and launch their careers, as was the case of Ernie Hudson. By the late ’60s, the company had disolved and the Ashby’s settled in California, where Dorothy recorded an album with Bill Withers and later, with Stevie Wonder.

Welcoming the harp to the jazz world: composing with new techniques

One of the most revolutionary aspects of including the harp in jazz was assigning it the main melody. A role usually played by the piano, saxophone or trumpet, the melody in jazz is the one to move with a little more freedom over the harmonic background that the rest of the instruments provide. A particular aspect of Ashby’s music is that all instruments have the same importance; her music often features solos for almost every instrument while the harp moves with arpeggios and chords, without losing substance. Including the harp to the genre required the development of techniques for the harp that allowed harpists to play jazz, such as pedaling. As jazz melodies are often rich in chromatic movement, it is difficult for harpists to play half step intervals without a proper pedaling. This was something that Ashby worked on during her time in high school, where her music teacher taught with a rigorous Salzedo technique (a very common technique in classical music, developed by Carlos Salzedo). Later on, Ashby would take some of Salzedo's technique for modern harp to include in her own compositions, such as the use of glissandi in the aeolian scale – a technique called Eolian Flux – on her Aeolian Groove (1957). Ashby’s compositions often present a dialogue between the instruments, where melodies fluctuate with chromatic movement over a walking bass line and a soft drumming. In many pieces from The Jazz Harpist both the flute and the harp move together and separate for solos, creating an ethereal atmosphere that brings a new, original sound to jazz, very different from anything heard before. 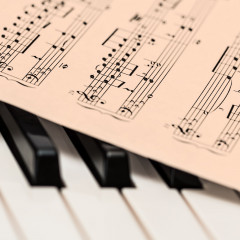 The importance of being Dorothy Ashby

How the harpist and composer changed jazz forever