There aren’t many seasons as idealised and romanticised as autumn – gold and orange leaves, crisp air and watery sunlight, and warm drinks and knitwear. But the reality is unfortunately often a lot more grey and damp and dreary in comparison… So here are some of Voice’s favourite autumnal films that you can live vicariously through when it gets a little too grim and gross outside.

It’s hard to tell exactly what time of year Harold and Maude takes place in, but the warm lighting, excellent ’70s brown coats and knitwear, and beautifully morbid subject matter have always made it feel distinctly autumnal to me. And it’s this subject matter specifically that feels most important to this time of year. At its heart, Harold and Maude is about death acceptance and loving life while you still can, which feels relevant in an almost pagan way to the last few months before the cold and lifeless winter sets in. The autumn equinox (which this year occurs on 22 September), and the pagan ritual of Mabon are about giving thanks for what the year has given you and getting ready to share what you have with others when the year turns darker and it’s this attitude that is central to Maude’s life outlook. Maude is constantly optimistic, finding joy in everything around her and in spite of everything around her, and wanting to share the ability to find this joy with those who need it.

My Own Private Idaho

I almost don’t like to recommend My Own Private Idaho to people because, truth be told, it’s almost unbearably sad. But it’s also unbearably beautiful – and one of the greatest films ever made (in my opinion). Filled with bare branches, piles of orange leaves, foggy breath, fire tones, and most importantly, an excellent selection of coats and well-layered outfits, My Own Private Idaho’s cinematographyis instantly recognizably autumnal. But its themes and plot echo autumn too, centring around struggling to adapt to and accept an increasingly colder world and colder shoulders. Through the sufferings of lonely protagonist Mike, it’s also a reminder to stick together with the people around you in this colder world, although a grim one at that.

The Spiderwick Chronicles is one of those films from my childhood that has faded somewhat in my memory. There’s something inherently autumnal about this, the passing of something that was once surely vibrant, especially considering the fact that my strongest recollections of the film relate to windswept leaves, an overgrown forest and a colour-scheme of browns and earthy greens, most prominent in the creatively designed goblins and trolls that besiege the main characters. Something else that I feel is very ‘autumn’ of the movie, is its decision to capture the loss of change. The central family in the film is going through a period of change, moving house, losing their father figure, and for children, any change can be a scary thing. The parallel between that family dynamic and the fairytale threat looming over them, a threat they learn to overcome, embodies the transformative beauty of the season.

Aging director Salvador Mallo (Antonio Banderas) sits in a luxury flat filled with beautiful artwork ruminating on past love and the pains of the present. He tells the audience the story of his life, and that of his parents. New experiences occur as well; he reunites with an estranged ex-colleague and writes his first story in years. As he narrates, Mallo keeps returning in his mind to the ‘spring’ of his life. A time when he was just discovering his love of art and his own burgeoning sexuality. The film is filled with colours that are rich and warm, and a tone that is deep and brooding. It is contemplative and quiet, with enough autumnal angst to justify its place on this list.

Barefoot in the Park

Stuck up, conservative lawyer Paul finds himself in chaos when he marries his eccentric new wife Corie. They meet quite the cast of characters in their new home – a five flight apartment in the heart of Manhattan. The illogical italian living on the top floor opens Paul’s eyes to his uptight cold ways eventually leading him to join Corie ‘Barefoot in the park’. With the warm oranges and reds of Corie slowly infecting Paul's cool grey life with fun and childlike whimsy this really is the perfect film to cuddle up to in autumn.

Wes Anderson’s depiction of Roald Dahl’s classic novel is about as autumnal as it can get, fitting with the theme aesthetically in a beautiful fashion. With an abundance of fire tones on the film's colour palette and a meticulous focus on cinematography and artist’s camera work, Fantastic Mr. Fox is undoubtedly a quintessential fall-themed film. The expert direction was complimented by Wes Anderson’s first foray into claymation stop-motion. It was a joy to behold, and led to the development of future successful films like Isle of Dogs. Roald Dahl's story was brought to life with George Clooney’s wonderful portrayal of the titular vulpine, and was reinforced by the superb performances from supporting cast members Meryl Streep, Bill Murray and Jason Schwartzman. A film as suitable for adults as children, and with a darker tonality yet a wholesome story, Fantastic Mr. Fox is a wonderfully autumnal film.

A truly iconic film, and one of Robin Williams’ most moving performances of his career, Peter Weir’s film looked at school life through the lens of a beloved teacher who teaches his students to take their self-expression to new heights through poetry. The boarding school students depicted in the movie were initially downtrodden by the enormous expectations of their parents, before meeting English teacher John Keating, who taught the students to subvert those expectations and live life against the status quo, thereby emboldening their confidence and giving a new sense of voice. The film is set at the start of the school year, so is at peak time for an autumnal mood, full of fallen leaves and warm colours, contrasted by bitterly cold night scenes, gothic architecture and natural scenery. 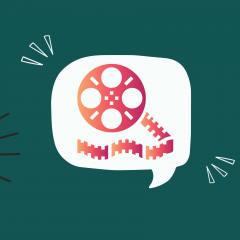