An autobiographical graphic novel about her life growing up in Iran during the midst of the Iranian Revolution, Marjane Satrapi’s Persepolis is as accessible as it is unforgettable.

Marjane Satrapi was born in 1969 to middle-class Marxist parents in Rasht, Iran. Growing up, she revealed an intelligence and sense of rebellion that made her life difficult under the fundamentalist regime that took over from the Shah. Her life is fraught with conflict, both internal and external. Desperate for an education and struggling to harmonise her deep spirituality with the brutal oppression of a theocracy, Satrapi’s childhood saw her exposed to violence and political forces far beyond what a ten year old is able to process.

The graphic novel chooses to capture this confusion, portraying a naive youthfulness beset by concepts she should not have experienced yet. At different points in her young life she would applaud the use of violence and torture, at other times she would be terrified of the things humans are capable of doing to each other. She questions God, her parents, and later in life when she leaves Iran, her own identity. 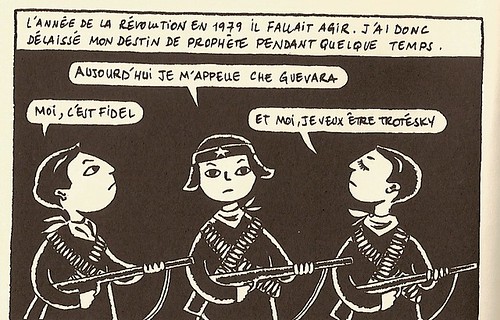 The second section of Persepolis follows Satrapi’s life after she leaves Iran at the age of fourteen, a decision made by her parents to give her opportunities that women living under the regime would not have. It is during this period of her life that she builds on her early learning — having been encouraged to read extensively since she was a child. She discovers nihilism and other philosophies (most of which leave her unimpressed), embracing feminism through the works of writers like Simone De Beauvoir. For the first time, she begins to explore who she is as a woman. Nothing is held back in this process of self-discovery, from her experiments peeing standing up to the harrowing recollections of prejudice and homelessness.

It is Satrapi’s willingness to share her vulnerability, and even her fallibility, that makes Persepolis such an unforgettable experience. This intimacy of detail combines with Satrapi’s transparency in such a way as to bring the reader into her life story.

This accessibility is the most extraordinary part of the graphic novel. Satrapi’s autobiography contains the cultural trauma of an entire nation, yet the reader never feels alienated. With charming and expressive character designs the journey is full of visual storytelling. The language is always simple and concise, letting the shocking or heartbreaking moments in the story speak for themselves. One moment, when Satrapi leaves her parents at the airport and turns around to see that her mother has fainted from grief, is described only by the words “it would have been better to just go.”

By following the story of one woman, the reader is given insight into events they likely would have no other way of fathoming. It is one thing to read a history book, it is quite another to be given a window into the life of a family, the soul of a conflict. 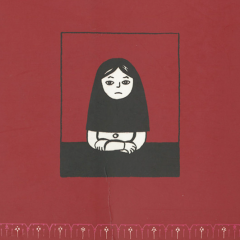 An autobiographical graphic novel about her life growing up in Iran during the midst of the Iranian Revolution, Marjane Satrapi’s Persepolis is as accessible as it is unforgettable.