The verdict is out this week on Swedish superstars ABBA and rapper Drake.

Undeniably the best thing to ever come out of the chaos that is Eurovision, ABBA have released new music and announced a tour. The catch? It will be a ‘virtual tour’ featuring digitally de-aged versions of the band members, dubbed ‘Abbatars’.

This isn’t an entirely new concept for the music industry – last year saw ‘The Whitney Houston Hologram Tour’ which displayed a projected image of the late singer. While some concertgoers would be excited to see a legend perform onstage in any form, I personally would be creeped out by seeing a hologram of a deceased person onstage. Not only that, but it’s hard to ignore the fact that virtual tours are often an opportunity to squeeze more money out of performers who should be left to rest in peace.

But at least all of the members of ABBA are alive, and I can entirely understand why a group of 70 year olds wouldn’t want to go through the grueling process of touring and performing internationally. I just hope this doesn’t kickstart a dystopian future of concerts becoming Blade Runner-esque affairs. Part of the magic of concerts is seeing your favourite artists in the flesh and pretending they made direct and prolonged eye contact with you out of a crowd of thousands. (Just me?)

One of Canada’s biggest exports, singer/rapper Drake released his new album Certified Lover Boy this week and eagle-eyed listeners have spotted an unwelcome name in the credits of one song: that of disgraced musician R. Kelly. Yes, the same R. Kelly who is currently facing charges including sexual exploitation of children.

Drake’s producer Noah “40” Shebib has since clarified that Kelly is credited in the song ‘TSU’ as there is a clip of DJ OG Ron C speaking, in the background of which there is an R. Kelly song playing, which they were “forced to licence”. Now, I’m no expert in music production, but maybe they could have chosen a clip that didn’t in any way feature the music of an alleged abuser of underage girls? I’m sure lots of those clips exist.

Once again, the music industry has proven its unwillingness to hold abusers accountable. Another recent example is Kanye West’s album ‘DONDA’ which features Marilyn Manson, who has had four sexual assault cases brought against him. The very least these artists can do is not work with the likes of Kelly and Manson, but when musical behemoths like Drake and Kanye fail to do the bare minimum, the systemic misogyny of the music industry prevails and victims of sexual assault are once again left in the dust. 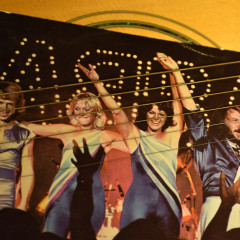 The verdict is out this week on Swedish superstars ABBA and rapper Drake.