Podcasts were once a niche product, but have since exploded to cover every topic imaginable. We have pulled out a few of our favourites that we think you'll love.

With so many podcasts now out there on different platforms, it can be hard to find the right ones for you. Our writers have compiled a list for you here, so that instead of endlessly scrolling through topics, you can drop right in to what we deem to be some of the most interesting podcasts for you to listen to.

David Chambers, who is commonly known as Blindboy Boatclub, is an artist, musician, author and TV presenter from Limerick, Ireland. Formerly of the hip-hop group the Rubberbandits, Chambers is known to wear a plastic bag over his head when performing. Although his plastic bag is not in sight through this audio platform, Blindboy is every bit as unapologetic and individual as his character, music and books will let on. He authoritatively comments on current events in a podcast that also contains an eclectic mix of art history, short fiction, improvisation, interviews and comedy. Not only are you likely to learn something incredibly interesting during one of his shows, but you will find your side splitting as his stories turn into passionate tangents. Blindboy is also a huge advocate of mental health and wellbeing, with much of his content helping listeners with their issues, especially since the pandemic.

How To Fail With Elizabeth Day

How To Fail is an ingenious idea for an interview podcast from novelist, journalist and broadcaster Elizabeth Day. The premise of the show is to take someone who is deemed successful in the public eye, be that a famous actor, comedian, presenter or writer, and to ask them about some of the lowest points of their career, and how they overcame them. Failure is something that everyone has to go through, and to hear those who you may idolise have had similar tribulations is not only humbling but also very motivational. If you are looking to hear stories that you simply can’t find anywhere else, spoken directly from the interviewees themselves, then look no further. How To Fail is one of the best podcasts for those with ambition and drive, or those who may be feeling low after having a failure of their own. The show displays a side of these influential people that is unseen in the majority of media, and is useful for anyone who feels knocked down and needs support.

Three Australian comedians, Jess Perkins, Matt Stewart and Dave Worneke, take it in turn each week to prepare a report on a topic decided by their listeners and present that report to the others whilst contending with innumerable interruptions, tangents and snide remarks. The topics range from covering historical events, important figures, urban legends and cultural themes. As a result, a frankly embarrassing percentage of my historical knowledge comes from listening to this podcast, although I don’t think I would remember half as much about the Eureka Stockade if I couldn’t relate the events to a myriad of jokes about pies and the AFL team St Kilda FC. They’re easy to listen to, and since very few of the reports are connected a new listener can jump in at any time, although they may find themselves lost when one of the many inside jokes of the show derails the report.

Another comedy podcast, this time with a true crime twist (... of lime). Drunk Women Solving Crime gives you pretty much exactly what it says on the tin. Comedians Hannah George, Catie Wilkins and Taylor Glenn, usually with a special guest (ranging from other comedians to crime novelists), discuss a true crime story at various levels of inebriation. The ones who haven’t heard the story will attempt to solve it, often with their own brand of hare-brained criminal understanding. They also ‘solve’ crimes that their listeners have been victims of. Even though they don’t always crack the case, they do provide enough laughs to make whichever listener brought the crime to their attention feel better about it, and what more can you ask for? Every episode is entirely unpredictable, with the chemistry between the comedians mixing with the alcohol they ingest to create many a hilarious anecdote or suspicious segway. With over 150 episodes to choose from, next time you find yourself with a true-crime itch but can’t stomach the seriousness of it all, give this podcast a try.

The episode titles of Other People’s Lives verge on exploitative and clickbait-y, with classics such as ‘I Legally Married My Sex Doll’, ‘The Catfish’, ‘I Can’t Stop Eating Rocks’, and ‘My Sexual Attraction To Clowns’. However, not only does the podcast deliver exactly what its titles promise, it also often does so with a surprising amount of empathy and lack of bias. Hosts Joe Santagato and Greg Dybec (and the podcast itself) do have their flaws, but overall it is incredibly refreshing to find media that treats these sorts of subjects – subjects that we’re taught to see as weird or even morally wrong–- with an even tone and open mind. By treating their anonymous guests this way, Santagato and Dybec encourage their audience to listen and understand rather than judge and jump to conclusions. Through Other People’s Lives, listeners can indulge that unavoidable human urge to peer into a life we might not understand (or feel comfortable with) but with a willingness to learn and accept – rather than the sort of schadenfreude ogling encouraged by the likes of Dr Phil and Jeremy Kyle.

There are a lot of folklore and fairy tale based podcasts available to those who love a good old fashioned story, but by my count, this is the best one. As someone whose childhood was filled with storytelling – and in a very traditional sense (think firelight and dark woods and cold nights and a strange storyteller passing through town that you’re either in awe of or afraid of) – I’ve often wanted something that could recreate the magic I felt then, and Dark and Twisty Tales comes as close as I reckon you can. Host Julia Norton has selected all the weirder and nastier stories out there (my favourite as a child and still my favourite now) and retells them with talent, just the right amount of ceremony, haunting folk music, and a healthy helping of regional accents (how well-executed they are, I’m afraid I cannot vouch for). It feels at times like we may have lost a certain amount of oral tradition in our lives, and certainly the joy of traditional stories - the telling and the hearing - but with Dark and Twisty Tales the art still lives on a little. 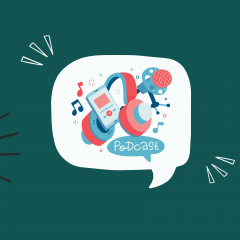 Voice’s favourite podcasts that you should listen to

Podcasts were once a niche product, but have since exploded to cover every topic imaginable. We have pulled out a few of our favourites that we think you'll love.