Her warm smile, retro suits and mostly ditzy characters became her trademarks in the film industry. From ‘Annie Hall’ to ‘Something’s Gotta Give’ this article looks at some of Diane Keaton’s most iconic performances and her biggest achievements.

Diane Keaton’s unique fashion sense, affairs and life choices made her memorable off-screen too. Born as Diane Hall, she is the eldest of four siblings. She became Keaton when she took on her mother’s last name. She never had children of her own, but she adopted her daughter, Dexter, and her son Duke, in her fifties.

Even though she never got married, her relationships with her co-stars or directors were often the source of tabloid gossip. Just to name a few: Woody Allen, Al Pacino, Warren Beatty, and Jack Nicholson all fell under her spell. This should come as no surprise, as when one experiences the idiosyncratic magic of hers on screen, or probably in real life as well, the effect is unforgettable.

Her big breakthrough was Kay’s character in ‘The Godfather’, where she played alongside Al Pacino. This was one of her most serious roles, where she played the struggles of an innocent woman who married for love, but her husband became the head of the mafia. The superb performance showed off her layers and talent as an actor. Not long after ‘The Godfather’ and its success, she was part of, arguably, some of the most memorable movies ever made. 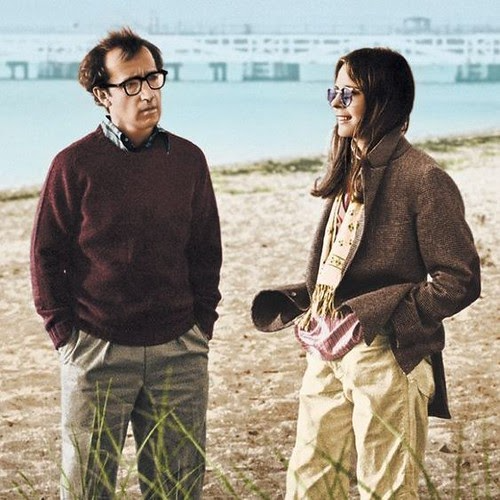 The Woody Allen period consists of eight movies they worked on together between 1971 and 1993. This list includes one of her biggest achievements, ‘Annie Hall’ which won her the Academy Award for Best Actress in a Leading Role. Annie is a ditzy, eccentric, and complicated character that established Keaton’s most known persona on screen. Due to Allen’s humorous writing and Keaton’s flawless playing, drizzled with witty comebacks, the pair not only established their individual careers but have created iconic moments on screen too. Thanks to their duo we can enjoy quite a few classic pictures today, such as ‘Manhattan’, ‘Love and Death’, or ‘Play It Again Sam’, and many others.  One could argue that her later roles and on-screen relationships with her co-stars were heavily influenced by this era in her life.

Rom-Coms and Other Delicacies

In later years she became known for her motherly roles in a lot of romantic comedies, such as ‘The Family Stone’, ‘Because I Said So’, ‘The Big Wedding’ or ‘Ruth & Alex’. One of the most successful films is ‘Something’s Gotta Give’, where she played alongside Jack Nicholson. Her character, Erica Barry, is a well-known screenwriter who falls in love with the infamous womaniser, Harry Sanborn, played by Nicholson. The pair’s vim and vigor has won the critics’ and the audience’s hearts, and it won them eight awards and a further thirteen nominations, which includes an Oscar nomination for Best Actress. An added bonus is Keanu Reeves’ presence, as a charming cardiothoracic doctor, who also finds Erica attractive… 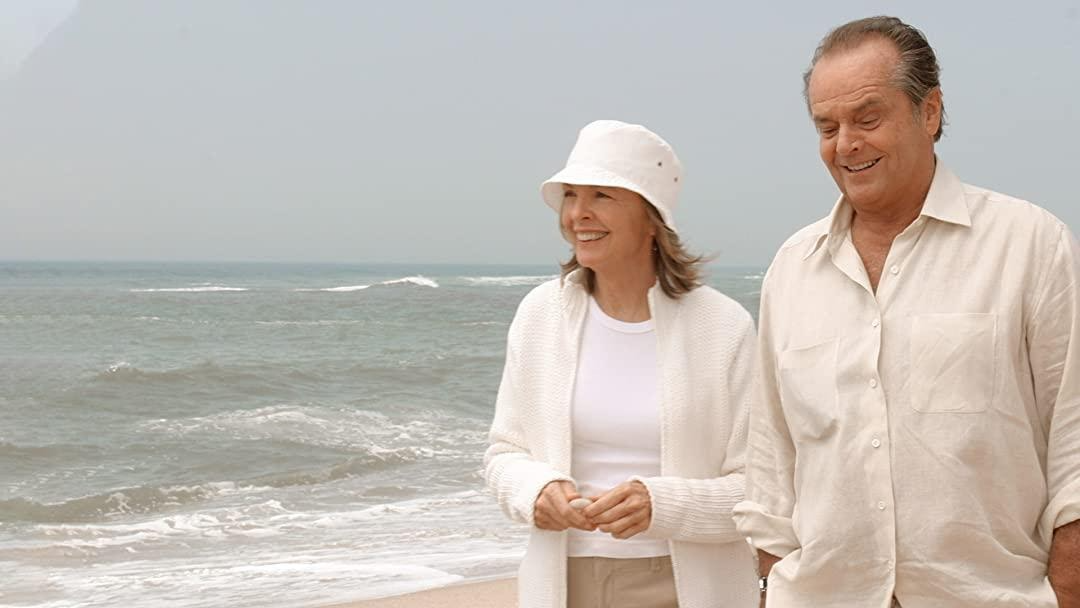 Big belts, manly suits, ironed shirts, and old school glasses were always part of the Diane Keaton package and the following movies were no exceptions either.

‘Morning Glory’ demonstrates the story of a struggling morning TV show and its road to success. The network hires a new producer, played by Rachel McAdams and a new co-anchor, Harrison Ford, decisions that Diane Keaton – the old presenter –is not entirely satisfied with. Even though it did not achieve critical acclaim, the audience loved the chemistry between the three actors. 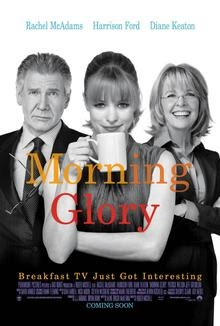 Within the Romcom category, her Christmas movies must be mentioned too. If you’re unsure what to watch in the festive season, ‘The Family Stone’ or ‘Love the Coopers’ could always be an option. In both productions the portrayals of slightly dysfunctional but loving families can be seen, and Keaton plays the mother who ties it all together. Break-ups, engagements, ruined Christmas meals and big arguments are all part of the fun. The scripts’ heartwarming qualities and the superb casts provide the usual sugar coated holiday movie feeling that everyone loves – no matter how much they might protest. 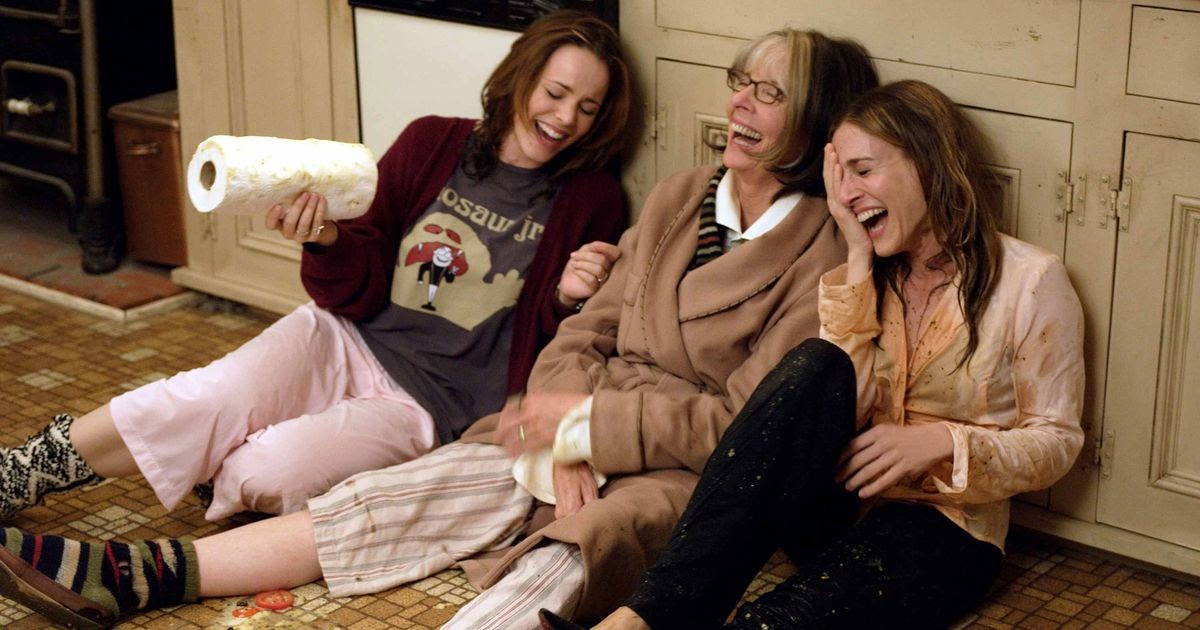 Still included in the romcom section, another category title should be: Marriage, weddings and other shenanigans. This list contains (but is not limited to): ‘Hanging Up’, ‘First Wives Club’, ‘Because I Said So’, and ‘The Big Wedding’. In these reassuring movies, which provide that much needed happy ending, there is always a slight edge to the comedy thanks to Keaton’s characters. Most of her roles depict a single or divorced mother, whose main priority is the happiness of her children. It is a lovely addition that in most of these movies she finds her own prince charming too. 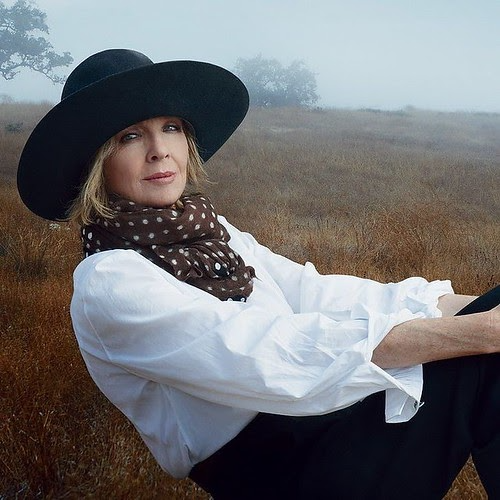 There is a Diane Keaton movie for every season, and the choices are almost endless. The aforementioned roles and her presence had an impact on how we look at female leads. Her body of work contains big and small successes and is rich and varied in storylines and interesting co-stars. She wears unisex clothing, has a cynical view of the world and is notoriously independent on screen and in real life too. Not needing a love interest, but rather wanting one, on her own terms, classified her as a modern role model for a lot of women. She proved that women can be mothers, have careers, be single (or not), and still be happy, even if the way these things happen goes against societal norms.

More information can be found in the sources below 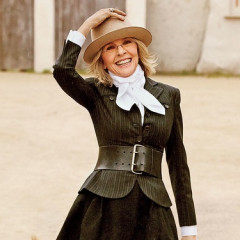 Diane Keaton For Every Season

Her warm smile, retro suits and mostly ditzy characters became her trademarks in the film industry. From ‘Annie Hall’ to ‘Something’s Gotta Give’ this article looks at some of Diane Keaton’s most iconic performances and her biggest achievements.