This week we have the publishers of Harry Potter and the saint that is Dolly Parton.

Bloomsbury Publishing (and She Who Shall Not Be Named)

2022 marks the 25th anniversary of the release of Harry Potter and the Philosopher’s Stone. Publishing house Bloomsbury is unveiling a commemorative edition of the book with its original cover design and bonus content inside that will only be available to purchase for one year. Sounds nice, doesn’t it?

Well, this would be nice if the entire Harry Potter series hadn’t been tarnished by its author’s inexplicable vendetta against transgender people. Voice has previously written on J.K. Rowling’s problematic reputation which has led large swathes of former Potterheads to abandon the series entirely, not wanting to give millionaire Rowling any further profits. And this is exactly what this forthcoming commemorative edition of Philosopher’s Stone is for Rowling and Bloomsbury – a cash grab.

All of the add-ons to the original series of books and films have felt disingenuous and lacklustre (see: Fantastic Beasts and Where to Find Them). It’s time to accept that Harry Potter had its heyday and there’s no need for further books or films or stage adaptations (a TV series will be next I’m betting). All these products do is put more money in the pockets of someone who chose the pseudonym Robert Galbraith for her crime novels, who just also happened to be an anti-LGBTQIA+ conversion therapist (this can’t be a coincidence). As someone who built her entire adolescent personality around loving Harry Potter, even I recognise that it’s time to let the series lie and for Bloomsbury to find a new author to base their marketing around. I will never understand how Rowling, who created this magical world that preached hope and kindness, could be so fixated on denying the rights of real human beings. The least we can all do is stop giving her money and a platform.

Even if you’ve never listened to country music in your life, you will have encountered in some way the positive lifeforce that is Dolly Parton. Yes, her songs are bangers (‘9-5’ is an anti-capitalist anthem) but she is also a businesswoman, humanitarian and now an author.

Parton is to publish her first novel in 2022, which she has co-written with crime writer James Patterson. Run, Rose, Run is about a young woman who is on the run and moves to Nashville to pursue her music-making dreams (yes, this sounds cheesy, but goddesses such as Dolly are above cheesiness). Not only this, but she is also releasing a 12-track album alongside the book, being the multi-talented queen that she is.

If you’re going to give your money to any author, it should be Dolly Parton. Not only did she donate $1 million to Moderna vaccine research last year, she also rejected plans for the erection of a statue in her honour in her hometown of Tennessee, saying “Given all that is going on in the world, I don’t think putting me on a pedestal is appropriate at this time.” Dolly just wants to sing her songs, look fabulous, write her book and be an unproblematic, philanthropic angel (take notes, Rowling). All hail Dolly Parton!

Header Image Credit: "Dolly Parton On The Banjo" by Joe Shlabotnik is licensed under CC BY-NC-SA 2.0 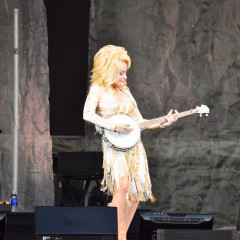 This week we have the publishers of Harry Potter and the saint that is Dolly Parton.