Voice MagBlogsFive of our favourit…

From characters that are reprehensible and impossible to defend, to others that are slightly more sympathetic, villains have featured on our screens since the inception of cinema. Read on as we look at our favourite film villains on Voice Magazine!

Villains are the lifeblood of most films, serving as foils to protagonists and leaving trails of destruction in their wake. With this in mind, the team at Voice Magazine have decided to write about the most memorable of wrongdoers. Join us as we take a look back at some of our favourite film villains!

Daniel Plainview - There Will Be Blood

As an absolute heavyweight of the film industry, it is no surprise that Daniel Day-Lewis won plaudits and accolades for his role as Daniel Plainview in Paul Thomas Anderson’s epic period drama There Will Be Blood. Despite being the film’s protagonist, Plainview is undoubtedly a villain as he shamelessly attempts to exploit those around him as he seeks to establish a fortune through oil during the Southern California oil boom of the late 19th and early 20th century. Day-Lewis performs the role with aplomb, adroitly presenting himself as an affable businessman in some scenes while letting loose with fits of invective rage in others, all while keeping viewers completely captivated.

With her love of kittens, the colour pink and torturing students, Umbridge is just such a tasty villain. There could not have been a more perfect casting choice than Imelda Staunton playing this witch in the Harry Potter series – her razor-sharp high pitched giggle as she wreaks Ministry-approved havoc on Hogwarts in Harry’s fifth year is just evilly sublime. We think she has her comeuppance as she gets kidnapped by centaurs, but like any good villain, she returns with a vengeance in the final installment of the series with Lord Voldemort’s horcrux around her neck. The magic of her character lies in her embodiment of every bureaucratic uptight teacher you inevitably encounter and despise during your school years. I would love to see an Umbridge origin story somehow, but for now I’m more than happy to repeatedly delight in Imelda Staunton’s wicked performance.

Gollum - The Lord of the Rings Trilogy

Tolkien’s Middle Earth is brimming with many memorable performances and fascinating characters. There are multiple antagonists to choose from; yet the likes of Saruman and Sauron pale in comparison to the complex nature of the series’ most complex and distinguishable character, Gollum. Andy Serkis’ striking performance of the human-like monster not only won him accolades, but also provided mental illness more exposure. The character’s split personality, tortured voice and contorting body language left viewers uncomfortable but intrigued. Although greedy and repugnant, Gollum conveyed a vulnerability and misguided struggle that audiences could feel some sympathy for. It will be interesting to see how Amazon Prime will present a young Gollum in the upcoming 2022 TV series, with Patton Oswald playing the role.

As much a victim as she is a villain, Jennifer Check, the titular boy-eating high schooler of Jennifer’s Body truly encapsulates both the vulnerability and cruelty of teenage girls. Surviving being sacrificed in a Satanic ritual by a fame-hungry boy band and returning, demonically possessed, to devour the local high school boys has all the feminine catharsis of Carrie or the (often problematic) rape-and-revenge horror subgenre. However, the most enjoyable aspect of Jennifer’s villainy is just how much of an iconic ‘00s mean girl she is, trading quotable barbs with characters often while midway through ripping their throat out. And without getting into the lengthy discussion on what equals “good” queer representation, Megan Fox as a bisexual demon who tears people apart has left an undeniable impact on queer media, the horror genre, and the collective Sapphic psyche.

Judge Frollo is an unforgettable tyrant whose emotional abuse of the vulnerable Quasimodo highlights the titular character’s shining optimism whilst establishing the villain’s manipulative and sinister character. A more twisted version than his Victor Hugo counterpart, his lust for Esmeralda chills the audience not just for its perverted nature, but also because of how distressingly common this dynamic has been and continues to be throughout time. It is the age-old story of a powerful man using his position and the protection he is given by a patriarchal society to force himself on a woman. And of course, the chilling majesty of his musical number Hellfire captures the horror of his self-justified villainy as his fervour breaks forth and he addresses the heavens, pleading for mercy whilst promising none. 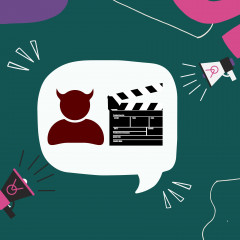 Five of our favourite film villains of all time

From characters that are reprehensible and impossible to defend, to others that are slightly more sympathetic, villains have featured on our screens since the inception of cinema. Read on as we look at our favourite film villains on Voice Magazine!