A vocal piece composed, performed and produced by myself using the words of Wilfred Owen's poem about the First World War.

After the cancellation of a very important concert to me, I used the opportunity to write some music. The scheduled concert was Benjamin Britten's 'War Requiem', honouring the soldiers who were forced to lay down their lives for a cause they didn't fully understand. Being a very religious man and a firm pacifist, the choir sang in latin, praying for the forgiveness of the men who fought and killed, and asking God to send their souls safely to Heaven. Is is uncertain as to whether the chorus represent the fallen soldiers, or angels overlooking Earth - perhaps both. The soloists sang the words of War poets, primarily Wilfred Owen.
Here is a vocal piece I composed and performed inspired by the sentiments of that work.
The poem I have set to music is Wilfred Owen's 'Dulce et Decorum est'. All the music is composed by myself, and all the vocal samples are my own that I have put through an echo in logic pro - a platform I am still learning to master!!
I have tried very hard to find the balance of a cathartic prayer for the lives lost in WWI, with an eerie haunting atmosphere, a ghostly presence that warns future generations of the gruesome reality of war. It comments on the fact that the fate of those who died was not glorious, but a hellish death sentence, or a lifetime of hideous trauma.
This is my first fully self-performed and produced composition, so is my no means perfect I am sure, but nevertheless I hope this moves you in some way. 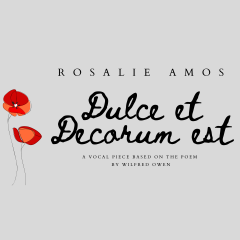 A vocal piece composed, performed and produced by myself using the words of Wilfred Owen's poem about the First World War.