An iconic video game of the PlayStation 2 era, Tony Hawk’s Underground successfully switched up the Tony Hawk’s series format and introduced the wonders of skateboarding to a new generation of gamers.

As part of the prestigious Tony Hawk’s series, Tony Hawk’s Underground (THUG) stands as one of the best skateboarding video games of all time. Developed by the now defunct Neversoft and released in 2003 for the Xbox, PlayStation 2, GameCube and Game Boy Advance, the title featured a narrative, marking a departure from the series’ regular format of level-based goals.

This plotline followed a user-created character in their attempt to become a professional skateboarder along with their friend, Eric Sparrow, and treated players to one of the most palpable villains in gaming at the time.

The gameplay in THUG is an immensely enjoyable experience as players are given free reign to skate around in levels that emulate the aesthetic of different regions around the world, such as New Jersey, Vancouver, Tampa and Moscow, among others.

Though THUG does not provide realism in the way that the later skate series does, this works entirely to its advantage as the fast-paced combos that players are able to chain together feel rewarding when they are pulled off successfully. With an array of different grab and flip tricks like nosegrabs, kickflips or benihanas, as well as special moves like Tony Hawk’s iconic 900, there is always a new combo waiting to be tested to achieve a high score.

Missions in the game largely echo those of earlier titles in the Tony Hawk’s series, with a variety of different score attacks and races to be completed. These are interspersed with other missions that drive the game’s plotline forward, such as retrieving stolen items or driving cars around levels. Additionally, players can choose to learn optional special tricks from real skateboarding figures who feature in THUG such as Chad Muska, Mike Vallely and Bob Burnquist.

While Tony Hawk’s Underground has an engaging story mode, the local multiplayer game modes are also a credit to the title’s replayability, and often made for entertaining battles for bragging rights between myself and my siblings. One such game mode is ‘Graffiti’, where players compete to tag as many objects in a level within a given time limit by completing a combo on or over it. Another memorable game mode is the ever-popular ‘Horse’, where players attempt to one-up each other by setting high scoring combos.

THUG was met with critical acclaim upon its original release in 2003, receiving a 9.5 from IGN and 4 stars out of 5 from GameSpy, and has a Metacritic score of 90, cementing its status as one of the most well-regarded video games of its generation.

After the successful release of the remastered Tony Hawk’s Pro Skater 1 + 2 in 2020, I sincerely hope that news of a remastered edition of Tony Hawk’s Underground will be announced soon so I can relive my childhood nostalgia! 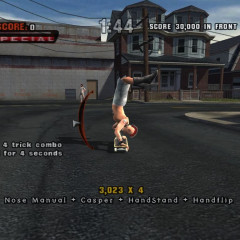 An iconic video game of the PlayStation 2 era, Tony Hawk’s Underground successfully switched up the Tony Hawk’s series format and introduced the wonders of skateboarding to a new generation of gamers.