As June is Pride Month, there’s no better time to be broadening your TV taste and introducing some more diverse LGBT+ content into your life.

Queer characters are becoming much more common on screen. However, often, LGBT+ content simply translates to: two young females in an overly sexualised relationship, who are only written to please a straight male audience. Or, it’s the ‘token gay’ character, who spends their screen time saying ‘didn't you know I’m gay?’ in a million different ways and lacking any in depth personality.

If you’d like to find some LGBT+ TV characters who are actually carved out, interesting, and more realistic, then this list should give you a helping hand…

Orange is the New Black

OITNB has become quite the go-to show for LGBT+ content. This 7-series Netflix hit centres around Piper Chapman (Taylor Schilling), a queer character herself, who is sent to prison after transporting drug money. This show isn’t glamorous. It’s not sexy. It doesn’t sugar coat things. It’s silly at times, yes, but it does work hard to portray real characters who aren’t just there to uphold the male gaze. When OITNB was first released back in 2013, it certainly raised the bar for on-screen intersectionality. The cast vary massively in age, sex, religion, class, race, sexuality… the list goes on. It’s also shed light on many important topics, such as the treatment of transgender prison inmates and systemic racism.

This science-fiction anthology series received plenty of praise for its episode, San Junipero (Series 3, episode 4), and even won two Emmy awards. Its story follows Yorkie (Mackenzie Davis) – an awkward woman, not fully confident in her sexuality – who stumbles across Kelly (Gugu Mbatha-Raw), her polar opposite, in a wild beach town called San Junipero. According to the series’ writer, Charlie Brooker, this episode initially revolved around a heterosexual couple, until he realised how much depth a same-sex couple could add to the story. It’s a great episode, full of mystery, philosophy, and an extreme spectrum of emotions.

Sex Education seems to cover almost everything. From characters coming to terms with their asexuality, to gay virgins learning the need-to-knows before they get down and dirty (because, funnily enough, there’s more to sex ed than learning how to put a condom on a banana), this show doesn’t back away from the difficult, sensitive topics, but rather confronts them in an uplifting light. It’s funny. It’s got a fabulous cast. It’s freeing. And it’s definitely worth a watch.

This comedy-drama series follows a group of girls working at a women’s magazine (inspired by Cosmopolitan). It’s cheesy and rather unrealistic at times, but one thing it pulls off nicely is its portrayal of a mixed-race, same-sex couple. Kat (Aisha Dee), who is the company’s social media director, seems terrified of commitment and hasn’t given her sexuality much thought, until she crosses paths with Adena (Nikohl Boosheri) an unapologetic queer Muslim woman. It’s not a perfect relationship – they certainly have their challenges – but it’s mindful, it’s heartfelt, and it’s refreshing.

A popular drama, particularly in the USA, The Fosters follows an interracial lesbian couple and their family, which is made up of biological, adopted, and fostered children. The great thing about this show is how normal it makes same-sex families feel. They have the same dramas, the same chaotic messy houses, the same everyday problems that many other families experience. In 2015, 13-year-old Jude (played by 15-year-old Hayden Byerly) had an onscreen kiss with Conor (played by 16-year-old Gavin MacIntosh) making this the youngest same-sex kiss on TV in the USA. This was highly controversial. However, it is worth thinking about the number of straight teen couples we see kissing in all sorts of films and TV shows, and yet many of us don’t bat an eyelid over that. What’s your opinion?

Think of Euphoria as America’s version of Skins – a coming of age story for angsty teens, fighting their way through identity crises, addiction, sexual awakenings, friendships, breakups, and a whole lot more. It’s a gritty, stark, and often cruel series, but it does shine a refreshing light on sexuality. When drug addict, Rue (Zendaya), meets Jules (Hunter Schafer), a trans teen, something more than a friendship begins to grow between the two. It’s a bumpy ride, but worth the watch.

We’ve already raved about It’s a Sin in our recent review, but here’s another reminder to give it a watch. Created by Russell T Davies (Doctor Who, Queer as Folk), the show revolves around a group of queer friends living their best lives in 80’s London, until the AIDS crisis hits and, almost out of nowhere, their community begins dropping like flies. It’s an incredibly raw show, and you get to know all the characters very well – flaws and all. Pride month is the perfect time to give It’s a Sin a watch, as it’s a poignant reminder of how far we’ve come since the AIDS crisis – a part of history often swept under the rug.

The Haunting of Bly Manor

After Netflix’s horror series, The Haunting of Hill House, was such a success, they came back with The Haunting of Bly Manor. While it’s just as creepy, Bly Manor is a love story at its core. Dani (Victoria Pedretti) and Jamie (Amelia Eve) wowed many viewers with their genuine, wholesome portrayal of a same-sex couple.

There’s not many other shows out there that centre around a sociopathic queer assassin, so, if you’re looking for something a little different, Killing Eve might be just what you need. It’s witty. It’s wild. It’s clever. And it’s very binge-worthy.

Despite the show starting back in 2015, Schitt’s Creek feels like it popped out of nowhere. Shifting from an alternative kooky series, to an Emmy-winning household favourite, this show shouldn’t just be praised for its rise to fame, but more specifically its coverage of LGBT+ characters. The plot centres around the filthy-rich Rose family, who manage to lose all their money and must move to the rural, rundown town of Schitt’s Creek. David (Dan Levy), the openly pansexual son of the Rose family, is sure to win over your heart, one season at a time.

If you’re looking for a short and sweet series to enjoy, here’s two: Banana and Cucumber. Written by Russell T Davies (the same guy behind It’s a Sin), both series run parallel, with overlapping characters, and aim to celebrate love without labels. Cucumber focusses more on Henry (Vincent Franklin), a middle-aged gay man who’s newly single, whereas Banana bounces off different queer characters in each episode. It’s quick and easy to watch, and you’ll have a lot of fun.

This science-fiction thriller follows the lives and troubles of a group of clones – all played insanely well by the talented Tatiana Maslany. A show that focuses on identity does inevitably have a rather diverse mix of characters. There’s Felix, the flamboyant gay artist, who’s never short of witty comebacks. There’s Cosima, the lesbian scientist who, as she puts it, is “not defined by my sexuality”. And that’s just it – rather than having token gay characters loitering in the background, this show fleshes each individual out, complete with their own interests, characteristics, strengths and flaws.

Of course, there’s many more queer shows out there – and I encourage you to find them. It’s never a bad thing to broaden your horizons. And we can only assume that, as TV progresses, there will be plenty more shows with fabulous LGBT+ content to come. 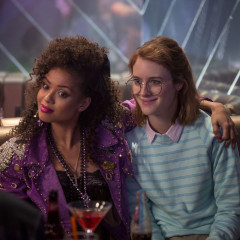 12 shows to watch during pride month