A look back at a classic English romantic comedy that is balm for the soul.

The sad thing about self-professed romcom haters – of which there are many – is that they end up missing out on wonderful films like Notting Hill. Even if the romance plot isn’t your thing, there is still the comedy to fall back on, and Notting Hill delivers on both fronts.

Written by Richard Curtis of Blackadder and Mr. Bean fame, Notting Hill follows bookshop owner William Thacker, played by Hugh Grant, who has a chance encounter with A-list film star Anna Scott, played by Julia Roberts. As ever with romcoms, the plot sounds cheesy and ridiculous on paper, but Grant and Roberts haven’t both had decades-long successful acting careers for nothing. Their dynamic on screen is entirely believable and becomes emotionally affecting, as Anna Scott’s fame clashes with William Thacker’s humdrum existence.

When you think you’ve gotten Notting Hill all figured out, it throws surprise after surprise at you. Alec Baldwin turns up in a brief cameo as Anna Scott’s awful Hollywood boyfriend (a role he plays suspiciously well). Rhys Ifans is pitch perfect as Thacker’s bizarre roommate who supplies a lot of the film’s laughs.

There are no filler scenes – each one is meticulously constructed either to evoke laughter or sentimentality, or both. One of my favourites is when Anna meets William’s friends for a home cooked dinner. It is a masterclass in brilliant actors bouncing off one another to perfect comedic timing. Hugh Bonneville, Gina McKee, Tim McInnerny and Emma Chambers (names you might recognise from Richard Curtis’s comedies Blackadder and The Vicar of Dibley) simultaneously all play their idiosyncratic roles to perfection and provide the ideal tonic to Julia Roberts’s Hollywood presence.

Even the film’s score delivers (as is the case with most of Richard Curtis’s films). We’re treated to tunes by Elvis Costello, Bill Withers, Al Green and Shania Twain that each sublimely fit the tender tone of the film.

I probably won’t have convinced the romcom haters to watch Notting Hill, but it’s their loss. It has influenced many later romcoms (some good, some bad) and remains an abiding example of British film, regardless of its genre. 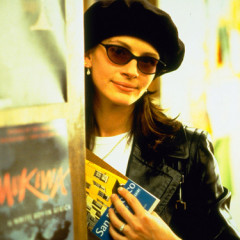 A look back at a classic English romantic comedy that is balm for the soul.