This comedy-drama is one of E4’s best ever TV series.

Broadcast from 2013-2015 and based on a book series, My Mad Fat Diary follows 16-year-old Rae Earl as she struggles with mental illness, body image issues and making friends in mid-1990s Lincolnshire.

My Mad Fat Diary brilliantly encapsulates both the mundanity and chaos of being a teenage girl. Essential to the show’s success is the complexity of Rae’s character, played by Sharon Rooney. Her lack of self-confidence and consistent sabotaging of her relationships with her friends and family are frustrating to watch, and yet it is impossible for the audience not to love her for her bravery and kindness. Characterisation like this is rare for its refusal to simplify and invalidate the experiences of teenage girls. Don’t get me wrong, the show still utilises the typical storylines we expect to see from media based around teenagers such as boy troubles and petty friendships, but My Mad Fat Diary manages to explore these situations with sympathy and sincerity. Rae is never the butt of the joke and she’s not there to be the comic fat character – instead she’s a real human being with a valuable story.

Just as Rae is excellently written, so to are the supporting characters. Before she found fame with the role of Villanelle in Killing Eve, Jodie Comer played Rae’s best friend Chloe, whose attractiveness and popularity serve as the antithesis to Rae’s character. This setup portrays a realistic friendship that is full of conflict but is maintained by a mutual affection which makes for heartwarming TV. The other fundamental relationship depicted in the show is that of Rae and Finn, played by Nico Mirallegro. Her constant confusion and suspicion at his attraction to her forms part of the tragedy of the show, and much of her character arc is structured around self-love and acceptance, which is an essential lesson for any teenage girl.

Another major element of My Mad Fat Diary is its unabashed depiction of mental illness. We are introduced to Rae in the first series just as she is released from a psychiatric ward for depression and anxiety and we are present during her frequent panic attacks and even her episodes of self-harm. It is far from an easy watch, but illustrates the importance of openly portraying experiences of mental illness, particularly within the show’s setting of the 1990s when mental health was talked about considerably less. Depending on each individual viewer’s personal experiences, there is solace and understanding to be found in almost every aspect of this series.

My Mad Fat Diary is the pinnacle of what all media made about teenagers should strive towards, and I’m due another rewatch. 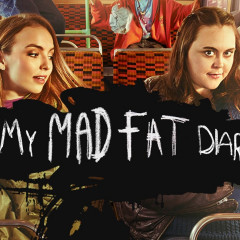 This comedy-drama is one of E4’s best ever TV series.