A first-person shooter with an immense story and intense gameplay, BioShock Infinite is this week’s choice for Voice Retrospects. Forming part of the renowned BioShock series, the game follows ex-Pinkerton agent Booker DeWitt as he attempts to find a woman called Elizabeth in the fictional city of Columbia. This marks a departure from previous entries into the franchise, which were set in the underwater world of Rapture, with the steampunk Columbia instead being suspended in the air.

Contemporary reviews hailed BioShock Infinite for its stunning visuals, which despite now being dated, still look impressive and serve as the benchmark for graphics in the era of the Xbox 360 and PlayStation 3. Each area of the game is distinct and feels as though it was crafted with a mix of gameplay and narrative in mind, with various audio logs providing background information about the rich world of Columbia peppered throughout. The moment when you first enter Columbia is a cinematic set piece in itself as the player is launched into the air amid stormy skies before viewing the city as a whole, which is bathed in sunlight. The pensive piano playing during this scene gives the appearance of a serene utopia, though this myth is quickly dispelled later in the game.

After reading the words ‘first-person shooter’, you could be forgiven for thinking that BioShock Infinite is a rote copy of other titles in the genre like Call of Duty, or Battlefield. However, this game differentiates itself from others with the implementation of ‘Vigors’, which are abilities that allow Booker to do a number of things, such as release bolts of electricity, possess enemy automatons to fight alongside him or fire flaming projectiles. Additionally, the inclusion of the ‘Sky-Line’, an overhead rail-based transport system that the player can ride, allows for ease of navigation around Columbia, and can be creatively used during firefights to Booker’s advantage.

Though the plot of this title can admittedly be confusing at times to follow, it’s an extraordinary rollercoaster of a ride that invariably leaves players with many memorable moments that are deserving of successive playthroughs. BioShock Infinite also features an array of equally memorable characters in Booker, Elizabeth, the revered Zachary Comstock and the mysterious Lutece twins, who all leave indelible marks on the game’s narrative and indeed on players’ minds.

Despite being set in 1912, the themes that the game addresses are scarily relevant to modern society. The game doesn’t shy away from challenging material, and depictions of racism, populism, cultism and nationalism are all present in the title. Reviewers praised Infinite’s treatment of racism, with other prevalent themes including the idea of choice, free will and destiny.

An engaging and stylistically sleek video game with entertaining gameplay mechanics and a phenomenal plotline, BioShock Infinite definitely warrants playing if you haven’t had the chance to do so already.

BioShock Infinite is available to purchase as part of BioShock: The Collection now. 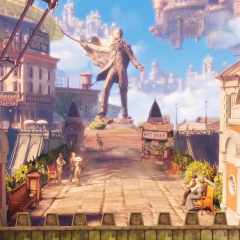