The host of this NSDF event, Andy Apollo, has featured in blockbusters such as 1917 and Murder on the Orient Express, and is set to appear in Netflix’s new fantasy series Shadow and Bone. Josh O’Connor is best known for his role as a young Prince Charles in the Netflix series The Crown, for which he recently won a Golden Globe. Apollo began the masterclass by asking O’Connor how he felt about winning such an accolade. He truthfully replied that the idea of competition in acting is “silly” and while it was nice to be acknowledged, he highlighted how awards are mainly centred around business and marketing.

It was this no holds barred approach that characterised the discussion, which then focused on O’Connor’s dyslexia and how this functions alongside his acting career. He views it as a positive thing, as in the arts “you’re encouraged to think outside the box and great art comes from thinking in a different way”. His motivation to pursue acting came from “wanting to be popular and impress people” and the drama studio was where he felt most comfortable at school and at ease with his dyslexia.

The dialogue around the struggles with the life of acting was where the event really came alive. Attendees learned that Apollo and O’Connor have been close friends since drama school where they lived together while studying and working. They exposed the unglamourous side of auditioning, which often had a less than 24 hour turnaround, and not having enough energy to put into the auditions because of the many part time jobs they had to juggle in order to live. At one point, O’Connor was balancing four jobs on top of auditions, and he stressed to aspiring actors that you lose control over your day-to-day life. Your schedule depends on what jobs you get or auditions you go for, and this massively affects your personal life. He emphasised that it is important to have some kind of support system beneath you to fall back on when things get tough.

O’Connor is a passionate advocate for mental health, which he referenced in his Golden Globes acceptance speech. He admitted that acting is a psychologically difficult job as actors spend most of their time empathising and losing themselves in fictional worlds, which can make it easy to lose the patterns of normal life. It is important not to rely on validation from jobs, and even if you love a particular role, the comedown once filming wraps can be harsh. He recommended self care practices such as meditation or exercise, as “actors only have their expression and they have to keep that in check, like a race car driver tends to their car”.

When finally asked for the favourite moments of his acting career, O’Connor settled on getting his first audition for the Royal Shakespeare Company and his first episode of The Crown. He insisted that he feels incredibly lucky, and sees the auditions as the hard work and the acting jobs as a holiday. 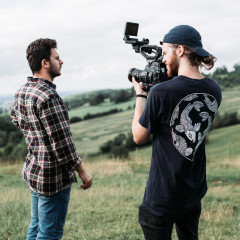