In the aftermath of Sarah Everard’s murder, was the police response to the vigil held for her at Clapham Common really warranted?

As a man with several female relatives, the news of Sarah Everard’s kidnapping and murder over the past month deeply unsettled me. While I thought I was aware of the reality that women face on a daily basis, I was shocked when I found out that 97% of young women have experienced sexual harassment in the UK. This was compounded by the rise of the #safetytips trend on TikTok, which further illuminated the lengths to which women have to go in order to feel safe.

Sarah Everard went missing on the evening of 3 March 2021 in South London, and her remains were found in a woodland in Kent on 10 March. The day before the discovery of her remains, a Metropolitan Police officer, Wayne Couzens, was arrested on suspicion of kidnapping Sarah, with this later being amended to suspicion of murder.

A vigil was held for Sarah in Clapham Common on 13 March, which attracted a crowd of several hundred people as the day went on. The Metropolitan Police began to arrest vigil attendees in the evening and broke up the crowd, which prompted calls for the Metropolitan Police Commissioner, Cressida Dick, to resign amidst a huge swell of public outrage against the police.

The police response to the Clapham Common vigil for Sarah Everard was, at best, naïvely tone-deaf, and at worst, horribly ignorant of the events that had previously transpired. Despite worries around Covid-19 and lockdown restrictions, it was later found that ‘Some protests can take place legally, even in areas under Tier 4 lockdown’. Forcibly arresting attendees and trampling over flowers that had been laid at the vigil could only result in the continued erosion of public (and female) trust in the institutions that are meant to protect them. That a member of the Metropolitan Police had been arrested on suspicion of carrying out the offence made this response even more baffling.

Cressida Dick’s dismissal of criticism towards the policing of the event and calls for her resignation came across as pontifical, as she said: ‘I don’t think anybody should be sitting back in an armchair and saying, ‘Well, that was done badly’ or ‘I would’ve done it differently’ without actually understanding what was going through [the officers’] minds’. While the situation was undoubtedly complex for officers policing the vigil, to insinuate that public institutions such as the police are beyond criticism by those they are designated to serve is undeniably an authoritarian attitude.

The publication of a police inspectorate report that essentially cleared officers of any wrongdoing during the vigil will have done little to assuage any outrage. As well as this, the revelation of sexual misconduct allegations against police officers will have further intensified public dismay.

Media coverage of the vigil at Clapham Common was described as a ‘public relations disaster’ for the police, with this inevitably resulting in a crisis of confidence. In the wake of the event and its aftermath, regaining the public’s trust must be a priority for the Metropolitan Police, though the proposed Police, Crime, Sentencing and Courts bill looks set to exacerbate this ‘public relations disaster’ further.

You can find practical tips on how to support women with actions on Voice Magazine here. 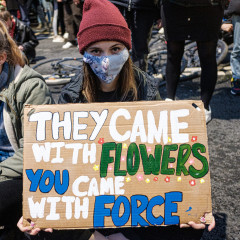 A look at the Metropolitan Police's response to Clapham Common

In the aftermath of Sarah Everard’s murder, was the police response to the vigil held for her at Clapham Common really warranted?