Trigger warning: This article refers to rape and sexual assault

Sarah Everard’s case brought to light an issue which has long been lurking in the dimness of back alleys. All across the country, protests and vigils advocating for safer streets have been held, demanding freedom for women too afraid to walk alone at night. And, as with many social and political issues, students have been especially vocal in this matter. Perhaps it is because young students are often the target of these attacks, or perhaps it is because students are the ones with the passion and the energy to protest them. But how should the world consider this group of young academics – as activists, or as victims?

Many universities have recently held forums discussing sexual harassment within their campuses, questioning the treatment of rapists and the consequences they face, as well as the responses that victims of assault receive. But conversation isn’t enough, many argue, to solve such deeply entrenched societal misogyny. And that is why, despite the danger that the current pandemic poses, many believe it necessary to have visible displays of dissent as well.

However, the pandemic does sour the public reaction to such protests. Hiding behind a facade of health concerns allows such displays to be swiftly shut down if a university so decides. But students are not to be so easily quashed.

Birmingham University is an excellent example. One of their accommodation blocks, ‘The Vale’, had several female students forced into cars and assaulted in its proximity in March. Six students reported cases of this nature. While rape alarms were handed out by the university, students complained of security doing little to physically intervene to prevent such crimes.

Birmingham University also held one of the largest ‘Reclaim the Night’ protests against sexual assault, with hundreds of students turning out to a socially distanced event. Thirty students spoke at the rally, retelling stories of their own experiences of harassment or abuse, and although the university is yet to respond to the students’ complaints directly, they were sanctioned in their event by university security.

So – victims or activists? Clearly the students are both. Perhaps the fact that it is the victims who are becoming the activists makes them all the more powerful. If people speak out about the issues that they are facing, their experience mobilises others. It is an encouraging reflection on society that victims are empowered enough to be the advocates of their own cause - even more so that they are inspiring others to join them.

‘Reclaim the Night’ has been organised by the London Feminist Network since 2004. Its current revival is testament to a long history of women fighting for their right to be safe on the streets. And its recent spread across the country, its recent spread across generations, can be viewed as a double edged sword. On one hand, it is a devastating condemnation of the fact that the same issues are prevalent all these years later, seemingly as endemic as Covid itself. Yet on the other hand, Reclaim the Night’s prevalence in the media shows that more people than ever are demanding attention for the issue. More people than ever are demanding that these crimes need better prevention.

After all, if victims are activists and activists are victims, it’s clear that no-one can take away the power or passion of these brave women advocating for change. 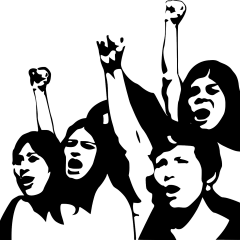