How are the UK's universities tackling climate change?

Universities can play a huge role in preparing each generation for the big wide world. And one of the biggest issues our current generation is expected to face is, of course, climate change.

Back in 2019, universities were urged to do more to reduce their carbon footprint. The Climate Commission for UK Higher and Further Education demanded that university Vice-Chancellors should be using their “unique position to harness the latest academic thinking, commit to action and drive change.” After all, if unis want to remain competitive, and put themselves at the forefront of technology, research and exploration, it seems fair that they should be setting an example for greener, more sustainable thinking, right?

So, what plans do UK universities have in place to make education more environmentally friendly? From beekeeping to Zoom conferences, it seems they have plenty of ideas up their sleeves.

Let’s start simple. One common thing that many unis have started doing is ‘Meat-free Mondays’. From Bristol to Southampton, many places are introducing more vegan and vegetarian options for students, as these often have a smaller carbon footprint compared to meat. In fact, meat and dairy products are said to account for around 14.5% of global gas emissions.

Goldsmiths, University of London, have actually taken things one step further by completely banning the sale of beef on campus, making them the first British uni to do so.

Many unis have pledged to reduce their plastic consumption. Some are giving freshers reusable flasks, in an attempt to cut down on disposable coffee cups. Others are simply offering discounted drink prices to students who carry a reusable cup.

Places like Aberystwyth and Plymouth University have also been working to remove plastic from our oceans. They were even awarded the Plastic Free Waterfront status by Surfers Against Sewage.

Meanwhile, the University of Hull has formed the Plastics Collaboratory which is working on fresh, innovative ways to cut down plastic, such as creating biodegradable polymeric materials. Impressive, right?

University academics are certainly no strangers to travel. Whether it be for research purposes, to guest speak at another university, or to join a conference, professors are used to commuting from place to place (before lockdown, that is). But is there a more environmentally friendly way of doing things, which doesn’t require so many air miles – or as big of a carbon footprint?

Juliet Osborne, professor of applied ecology at the University of Exeter, who published a report on this topic, said that universities should be doing more remote work to cut down on travel. She said, “it feels like no one’s even been considering [cutting down flights] so far in some universities.”

She also suggested that universities should improve their communication, and get better at sharing the outcomes of conferences, as this would mean less people would need to attend and, consequently, necessitate less travel.

Of course, whether they want to or not, Covid has forced many universities to follow Osborne’s advice. And now that we know it is possible for universities to function remotely, what will they choose to do when things go back to normal?

We all know the importance of ‘reduce, reuse, recycle’. But how are universities encouraging students – who are stereotyped (rightly or wrongly) as messy, lazy, and naive – to do this?

Manchester Metropolitan University is enticing their students with cinema tickets and a £300 prize for the student flat who most actively recycles. They also hold ‘Pop Swap’ on a termly basis, where students can exchange unwanted books and clothing, rather than letting them go to waste.

Meanwhile, many unis work hand-in-hand with charities and clothes banks. The University of Gloucestershire regularly collaborates with The British Heart Foundation. They encourage staff and students to donate unwanted clothes to charity rather than throwing them away.

Bees have been seriously affected by climate change, with many in decline across the world. However, unis such as Glasgow School of Art and the School of Oriental and African Studies (SOAS) have introduced them onto their campuses. Their bee-keeping schemes are a great example of people and wildlife sharing space in peace.

It’s not just about what the universities are doing, but what they look like too. Making eco-friendly buildings is becoming increasingly necessary in today’s world.

The University of Hertfordshire was the first to build a zero-carbon student accommodation block back in 2016. The 3,000-bed building cost a whopping £120 million to construct, and is run on biomass fuelled energy.

Of course, it’s not just about universities being eco-friendly themselves – it’s about them encouraging their students to make greener choices too. After all, these students will be running the country sooner or later, and they need to be prepared to tackle the world’s climate crisis.

Many unis are trying to intertwine students’ courses with sustainable work, whether that be by researching greener business methods on a marketing course, planning an eco-friendly festival on an events management degree, or covering the climate crisis on a journalism course. At The University of Gloucester, who currently rank number 1 as the UK’s most sustainable uni, 89% of their students have said they expect to see action on sustainability as part of their university experience.

A recent poll conducted by the University of Winchester found that 54% of Generation Z consider climate change the most important issue of today. And perhaps more importantly, a majority agree that not enough is being done.

As said by the University of Winchester’s vice chancellor, Joy Carter: “Tackling the climate emergency requires a revolution in everything we do – and that includes universities. The good news is that the generation of students coming into our campuses are ready for this kind of action.” 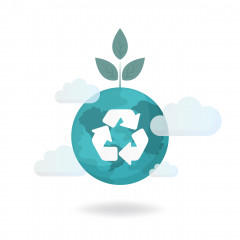 How are the UK's universities tackling climate change?