Voice MagBlogsThe effect of US ‘Te…

How our favourite US ‘teen’ TV dramas have been destroying our mental health, especially among teens...

*Trigger Warning* as there are mentions of sensitive topics in this article.

We all love a bit of escapism in the form of a trashy, guilty-pleasure TV show, accompanied by some junk food, and followed the next day by talking about it with your friends. As I gain more life experience, I can watch these with a sense of distance, understanding how ‘out there’ the entire concept of these shows are. However, when I watched these shows at about 15 years old, I remember trying to remind myself that the actors were all airbrushed and on a professional diet and workout plan, but in reality, I felt pretty inferior in comparison. 90210 and Gossip Girl especially are prime examples of the 'teen' dramas that don't fall into the fantasy genre, hence why we get the problem of referring to them as the more 'realistic' shows in comparison to The Vampire Diaries or Teen Wolf, for example.

There is another article by fellow Voice Contributor Alexandra Hart, titled ‘The problems with casting older actors to play teenagers’, which addresses this issue more specifically. I really encourage you to read that as well for further insight.

To reveal how far away the actors are from their characters’ ages, I have constructed a list of key characters in Gossip Girl and 90210.  It shows the name of the character, the age the character is meant to be, and then in brackets the actor and how old they were at the beginning of the first series.

By casting actors upwards of five years older than the characters they’re depicting, it gives those characters physical attributes they wouldn't realistically have, resulting in growing insecurities among teenage viewers based on body image. Girls may feel the need to lose weight, for example, or boys disappointed that they haven't yet somehow developed a proper six-pack like 30-year-old Trevor Donovan’s. The older casting also gives the characters psychological and emotional attributes that don't usually develop till later years after more life experience.

First of all, titling the episode in this way indicates that there is a time limit for when a girl should lose her virginity by.  Secondly, it suggests that 16 is a late age to lose one's virginity. Do these shows suggest that maybe the 'ideal' age to start being sexually active is about 14 or 15? When I was watching these shows at 14, I didn't question the logic (or lack thereof) in the storylines. I only felt inadequate in comparison to the glamourous 20-year-olds who were depicting girls my own age having at least three serious and sexually active relationships by the time they were 16. Why do the producers not expect us to question this? Because the characters look old enough to subconsciously distract us from attaching their storylines to real school kids. But many teenagers watching may think this is normal behaviour.

Characters from both shows are given the history and storyline of the average 29-year-old, in my humble opinion. This is in no way to say that there aren’t teenagers who are practicing safe sex and being mature in that way, but the depiction in the show is that this is how all teenagers are, and for those who aren’t, they are outed as different. The sex scenes, which are frequent in Gossip Girl especially, are very glamourised. Warmly-lit, a great soundtrack, but most importantly, mature actors who have much more experience than someone the age of their character would have.

In the way that pornography presents a warped perception of what sex is (to say the least), these scenes definitely plant the narrative to teenagers that “these characters my age are all doing it... why am I not doing it?” or, perhaps, “Why isn't it like that when I do it?” Older viewers have the maturity to accept how ridiculous the storylines are, but for teenagers, the glamorous lifestyles and attractive cast members are enough to distract from logic – or they were for me, at least.

The Bizarre Storylines in a High School Setting

Yes, it's all fictional, and a trashy 'high school' show really is a great form of escapism. However, the storylines get so far-fetched that it is hard to take them seriously. A good example is the epic love story with equally cringey dialogue in the on-off relationship of Blair and Chuck in Gossip Girl:

Blair: ''Then look down deep into the soul I know you have, and tell me if what you feel for me is real, or if it's just a game. If it's real, we'll figure it out, all of us, but if it's not then please, Chuck, just let me go.''

There is even a storyline involving Chuck and Blair that is very reminiscent of Indecent Proposal, the board meeting of which I’d be fascinated to witness. Some of the other more general eye-roll-inducing elements include teenagers taking each other on extravagant dates with no input from parents/guardians, victims of casualties, drug-dealers who become love interests, and the infinite wealth the characters have access to. It is far too easy for people watching the show to reflect on their own lives and feel a twinge of jealousy. Even the depiction of more gruesome, distressing topics; the drugs, eating disorders, cheating, PTSD, damaging family dynamics, peer pressure, even mentions of self-harm and suicide; just seem, from my perspective, to be glamorised – presented as a reel of drama, with no real focus on the very real consequences of these issues. It shows teenagers a very warped perception of how to handle challenging situations and the consequences – which always disappear faster in TV than they do in real life.

Some people may be thinking that without all these far-fetched choices, then the shows wouldn't be all that exciting. It’s hard to predict, but moving forward, I think TV writers, directors, casting directors, and even actors with a good public platform need to take more responsibility for how they present a window of the world to a young audience. This doesn't mean we can't enjoy a little guilty pleasure with extravagant storylines and a good sense of escapism, but it all comes down to the demographic the production aims for. Real-life is a pretty wonderful rollercoaster, and, ultimately, it’s real-life that should inform the TV shows that teenagers are watching. 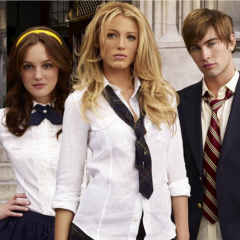 The effect of US ‘Teen’ dramas on their actual teen audience

How our favourite US ‘teen’ TV dramas have been destroying our mental health, especially among teens...