To challenge internet censorship in China, GreatFire has released an AppMaker service with censorship-circumvention in mind. GreatFire Grants Manager, Dan McDevitt, led a session at MozFest 2021 to give more details about this service!

Led by Dan McDevitt, Grants Manager at GreatFire, ‘Decentralizing circumvention: a DIY approach to making censor-resistant apps’ was a MozFest 2021 session that focused on a GreatFire product called AppMaker.

The session began with a quick overview of GreatFire, with Dan stating that the organisation’s primary goal is to monitor and challenge the censorship of the internet by authoritarian governments, specifically in China. GreatFire currently maintains several projects such as FreeWeChat and FreeWeibo, both of which play on existing social media and messaging apps in China, and are designed to provide real-time information and conversations that may otherwise be censored in the country.

AppMaker is an Android-specific GreatFire product that aims to provide a do-it-yourself approach to making and distributing censor-resistant apps, as people’s experience with smartphones have gradually become more app-centric instead of browser-based. The product and any apps made through it are free to use indefinitely, and the service also provides scope for customisation.

Apps made through AppMaker are designed to be lightweight, fast and stable, while an in-built circumvention system allows users to access websites including those that are blocked in some locations.

After AppMaker’s release in August 2020, different organisations such as the Hong Kong Free Press and the Human Rights Foundations have endorsed the product and shown their support for the project.

In order to create an app, users simply navigate to the website, choose an app name (this allows for an innocuous approach in censored environments), choose a URL that the app will open by default and an app icon. After this, an .apk file for the app will be downloaded to the user’s phone and a QR code will be generated to share their created app with other individuals.

Apps created with AppMaker also function as browsers and are based on GreatFire’s FreeBrowser software, allowing users to navigate to different websites. Dan stated that the primary target audience for AppMaker is intended to be organisations and content creators who perhaps do not have the resources to build censor-resistant systems. He also noted that there has been a large uptake of individual users creating apps through the product in China and other regions.

GreatFire’s method of circumvention utilises a ‘collateral freedom’ approach through domain fronting, which disguises censored internet traffic to look like authenticated content. This aims to raise the cost of censorship for an authoritarian government, limiting their options to either blocking all internet traffic, which would be economically costly, or not blocking any traffic at all.

‘Decentralizing circumvention: a DIY approach to making censor-resistant apps’ was an informative session about a service that seeks to empower users and protect them against internet censorship!

For more information about GreatFire and their projects, click here. 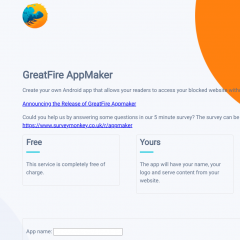 To challenge internet censorship in China, GreatFire has released an AppMaker service with censorship-circumvention in mind. GreatFire Grants Manager, Dan McDevitt, led a session at MozFest 2021 to give more details about this service!