Sometimes, the simplest things can be cause for laughter. Using a Markov chain with a corpus of characters, this was the goal of the MozFest 2021 session ‘Laughing with computers: using AI for comedic effect’, led by creative coder, Hay Kranen.

To open his Mozilla Festival 2021 session, ‘Laughing with computers: using AI for comedic effect’, creative coder Hay Kranen provided participants with information on his background and experience. Hay created his first website in 1998 and has previously worked for Dutch newspaper 'de Volkskrant', in addition to being actively involved with museums and art institutions as a freelancer. In 2016, when Kanye West’s The Life of Pablo album was released, Hay developed a Kanye tweet generator using a Markov chain to do so.

After this, Hay asked attendees to briefly introduce themselves, where they were attending the session from and what their favourite animal was. This information would later be used in a demonstration of a Markov chain he had built to generate new words and names.

Hay then explained the concept of a Markov chain, having first come across them after reading a Jeff Atwood article titled ‘Markov and You’. A Markov chain is essentially a statistical model that, when provided with a corpus of data, is able to analyse individual characters and words in order to generate new words.

Using the example of a corpus made up of 3 words - cat, cars and clear - Hay demonstrated how a Markov chain would take into account the characters in each word and attempt to generate new words based on the corpus of data.

While the above demonstration was carried out on Microsoft PowerPoint, Hay also developed a website called the Markov Machine, where participants could interact and experiment with their own Markov chains.

Using the names, locations and favourite animals of session attendees, Hay created a larger corpus of data for the website’s Markov chain to generate new animal names, which resulted in some humorous creations such as a ‘Goahorse’, ‘Cankey’ and ‘Doat’.

While the project highlights the comedic potential of Markov chains, it was also suggested that such a technique could be used to generate fantasy-esque names for authors or perhaps company names as well.

A lighthearted session, ‘Laughing with computers: using AI for comedic effect’ definitely elicited laughs from the audience in attendance. 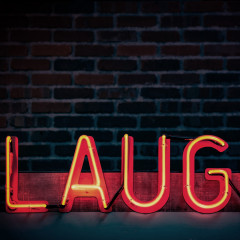 Sometimes, the simplest things can be cause for laughter. Using a Markov chain with a corpus of characters, this was the goal of the MozFest 2021 session ‘Laughing with computers: using AI for comedic effect’, led by creative coder, Hay Kranen.