Internet censorship has become a topic of discussion in recent years as social media websites or apps are blocked in different countries. OONI is an organisation focused on highlighting such censorship and held a session at MozFest to discuss this!

OONI (Open Observatory of Network Interference) is an online community focused on measuring Internet censorship across the globe and was established in 2012. A free software project, OONI collates open methodologies and data that is publicly available for use in research.

2 representatives from OONI, Arturo Filastò and Sarath Madayil Sreedharan, headed the MozFest session ‘Exploring Internet censorship through OONI data’ and showcased some of the data the organisation collects.

After briefly explaining OONI Probe – a desktop and smartphone application that can be utilised by users in censored environments to test if different websites and applications are blocked – the duo went on to give a demonstration of OONI Explorer.

OONI Explorer is a web platform that allows users to visualise the open data and measurements collected by OONI in various countries and see which, if any, websites or applications have been blocked. The organisation collects approximately 3.8 million pieces of data per month from more than 22,000 networks around the globe.

While sharing screens, Arturo showed that the search interface for OONI Explorer is quite comprehensive, and can filter by country, domain name, time and ASN (autonomous system number), as well as status. When looking at the measurements collected for each country, it is also possible to see what blocked websites would look like for Internet users in a specific region.

A real life example was provided by the speakers, using the case of Burundi. Using measurements taken from networks in the country, OONI were able to establish that during the Burundian general election held in May 2020, social media sites and WhatsApp were blocked on the day of the election. As these different means of communication were blocked and disrupted at a crucial time, this was an example of Internet censorship within the country.

When asked if the data collected by OONI could provide a metric for Internet censorship across the globe, Arturo and Sarath stated the organisation would not feel comfortable with making an overall metric to compare or rank different countries. They went on to say that as the heuristics used to detect the blocking of websites and apps are not perfect, there can be instances of false positives or negatives. A ranking system for Internet censorship would require a more qualitative and nuanced study according to both speakers.

One participant also asked about the risk involved for users running the Probe in countries that are more censorship-heavy, or undemocratic. In response, Arturo and Sarath emphasised that OONI is aware and concerned about the potential risks to users, and operates with an informed consent-style approach. When installing the OONI Probe, users are made explicitly aware of what the app is and what it does. After this explanation, users are quizzed on the OONI Probe’s functionality and if they are unable to answer the questions correctly, they cannot use the app.

The session concluded with a sneak peak at a new user interface being developed by OONI that implements charts as a new, user-friendly method of displaying data. 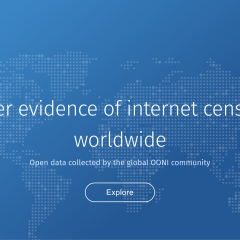 Internet censorship has become a topic of discussion in recent years as social media websites or apps are blocked in different countries. OONI is an organisation focused on highlighting such censorship and held a session at MozFest to discuss this!