The site Tinkercad was the basis for this event and is considered the starting point for those new to 3D modelling, which is defined as designing something in a 3-dimensional space with the goal of creating a model for some function. There are many industries 3D modelling is useful for, such as video games, engineering, architecture and designing products for retail.

Under the guidance of a 3D modelling expert, I was able to create my very own unique 3D monster and let my imagination run wild!

Tinkercad supplies the user with a variety of readymade shapes, colours and characters that you can work with, and the site itself is easy to navigate. The key skills we gained during the session were moving around the 3D space and adding, manipulating and combining objects. As this exercise was just for fun, we disregarded the measurements of each object, but if you were 3D modelling with the intention of printing your creation, you would need to accurately calculate the measurements. For more advanced creations, Sketchup is the industry standard for 3D modelling professionals.

At the end of the session, everyone came together and displayed their creatures which were an assortment of colours, sizes and shapes, showing the endless possibilities of 3D modelling.

If you’ve considered getting into 3D modelling but always felt intimidated as a beginner, I would highly recommend Tinkercad as a starting point! 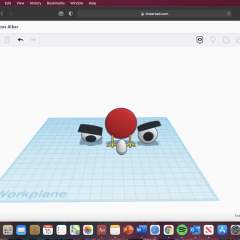