Architecture, satellite imagery and journalism coalesce to uncover China’s mass internment of Uighur Muslims, one of the biggest humanitarian crises of our times.

Xinjiang is one of China’s most ethnically diverse regions, with 13 million Uighurs, 9 million Han Chinese and 1.5 million Kazakhs, as well as Mongolian, Hui and Kyrgyz populations. In 2017, the Chinese government began targeting and detaining thousands of Muslims in so-called ‘re-education centres’, of which there are estimated to be almost 400. With nationwide censorship, mass surveillance and heavy security, these camps are almost impossible to get in or out of. Former architect Alison Killing and journalist Megha Rajagopalan have joined forces to use satellite imagery to publish research and build reconstructions of these camps, which they gave the Mozilla Festival audience the tools to do too.

Working as a journalist in China, Megha Rajagopalan began researching Xinjiang’s internment camps by contacting former detainees for interviews and even managing to locate and visit the outside of one camp. This was followed by her visa being swiftly removed. Coming back to the UK, she had credible evidence of the ordeals detainees undergo in these camps. This includes food and sleep deprivation, routine interrogations, overcrowding, mass sterilisation, forced abortions, sexual violence, rape and forced labour. These detainees have not committed or been charged with any official crime, but instead are imprisoned for arbitrary reasons to do with using uncensored technology such as WhatsApp, or for practicing Islam. The Chinese government has maintained that these camps are for educational and vocational purposes, and in some cases has denied their existence entirely.

This is where Alison Killing comes in. As an experienced architect with her own firm, she and Rajagopalan have used Google Earth to locate and analyse the construction of these camps from satellite images. The Chinese equivalent of Google called Baidu and its mapping system is subject to government censorship, meaning there are areas that appear greyed out. By cross-referencing these areas with the freely available site Google Earth, they have been able to pinpoint many of the internment camps. Killing’s architectural background aids her in dissecting the uses of the different buildings through the satellite images. She explained that the walls surrounding one camp are 4-5 metres high, which can be measured by the shadows, and that the distance between the buildings means sunlight is blocked out for the prisoners. She identified factory buildings by the use of steel roofs, where forced labour most likely takes place. In one satellite image, we could also see groups of people in red uniforms lined up in military formations, surrounded by barbed wire.

Zooming out on Google Earth shows the scale of some camps, which can hold up to 40,000 people approximately. Many of them were also in close proximity to residential areas, showing that they are integrated into society. Another Google Earth feature provides an historical timelapse of the land, which can detect when the camps were constructed and if they were makeshift, or assembled from buildings that were previously hospitals or schools.

That the Mozilla Festival attendees were taught by Rajagopalan and Killing about this humanitarian issue and how to use Google Earth in an investigative capacity proves the positive uses that technology can have. Anyone with a computer and an internet connection can look up these camps, leading to more awareness and activism and pressure to release the Uighur people.

If you would like to donate to the Uighur cause, you can do so here. You can also find Rajagopalan and Killing’s research data here. 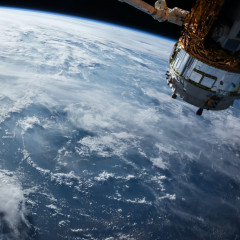 Architecture, satellite imagery and journalism coalesce to uncover China’s mass internment of Uighur Muslims, one of the biggest humanitarian crises of our times.