One of the first events to kickstart Mozilla Festival 2021 was a celebration of the global community of coding stitchers and embroiderers in a union of technology and art.

The star of this event was Turtlestitch, which is a ‘browser-based educational programming language which generates patterns for embroidery machines’. Its creator, Andrea Mayr-Stalder, explained that the freely available software is used for introducing young adults to using open-source coding to express their ideas in their designs. We were shown examples of clothes, cushions, jewellery, beaded necklaces, medallions, embellished masks and many more objects that showcased designs made on Turtlestitch. It uses a ‘pen module which it interprets as a needle and transforms its output into widely-used embroidery file formats.’ It is also used professionally by fashion designers who find its possibilities useful for inspiration.

The draw of coding stitching is its alteration of the traditionally (and stereotypically) feminine and domestic task of sewing by merging it with 21st century mathematics and computer science. Vera Molnar was mentioned by the panel, who has pioneered computer art since the 1950s and led the way for programmes such as Turtlestitch.

It is also a channel for craftivism, which is defined as ‘a form of activism, typically incorporating elements of anti-capitalism, environmentalism, solidarity, or third-wave feminism, that is centered on practices of craft – or what can traditionally be referred to as "domestic arts”’. One panellist discussed her creation of a stitched quilt inspired by the womens’ rights movement. Through coding, sewing is transformed into a powerful computational tool for expression and activism.

However, there is also the risk that through the efficiency of coding and the digitisation of embroidery, aesthetic value may be lost. It definitely isn’t for everyone and some may prefer to stick to the old fashioned needle and thread.

Despite this, the sense of community in coding stitching is strong. This event alone featured stitchers from Ireland, China, the Netherlands and New York, all united in their passion for digital embroidery.

If you want to give coding stitching a go, there are live workshops running throughout this week across time zones and your design may be featured in the Mozfest gallery and be physically posted to your home! You can find all the workshop details and Zoom links here and Turtlestitch’s website here. 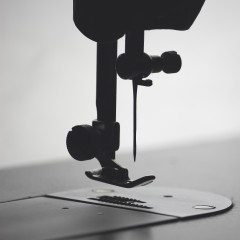 One of the first events to kickstart Mozilla Festival 2021 was a celebration of the global community of coding stitchers and embroiderers in a union of technology and art.