With several tender and melodic folk songs already on Spotify, Maria Shepard – ‘a London-based law student by day and singer-songwriter by night’ – deserves a bigger audience.

Although Shepard’s sparse instrumentation and immaculately controlled voice might tempt comparisons to Phoebe Bridgers, self-titled-era Misty Miller and even, in her more powerful moments, London Grammar, Shepard is already carving out a sparse sound all of her own.

Slower tracks such as ‘This Is The Storm’ serve to highlight Shepard’s sophisticated musical talent, featuring some satisfyingly subtle layering, while the more up-tempo tunes showcase radio-ready folk waiting to be discovered. The chorus of ‘At Last’, following from a simple melodic verse, proves to be unexpectedly catchy; carol ‘The Quiet of Christmas’ is a future yuletide classic, feeling like a modern take on a traditional structure; while the bittersweet ‘So I’ll See You’ is as infectious as it is moving.

Easy-listening instrumentation meets cutting lyrical introspection and accomplished songwriting to make a formula with an appeal for all ages. Feeling both nostalgic and instantly timeless, Shepard’s tunes are more than just indie-acoustic folk. With talent as sharp as this, let’s hope that listeners start to take notice. 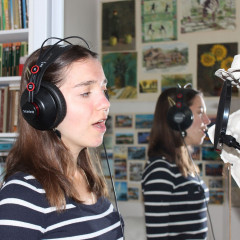 With several tender and melodic folk songs already on Spotify, Maria Shepard – ‘a London-based law student by day and singer-songwriter by night’ – deserves a bigger audience.