A tale of unfathomably huge numbers, kittens, and an awful lotta paperclips

Idle Games are not everyone’s cup of tea. Despite the incredible surge in popularity of Cookie Clicker in 2013, they have in many ways returned to obscurity as a genre – a fad if ever there was one. However, unlike many fads, and perhaps due to some fascinating (no, really) mathematics that power such games, and rather little being required on the graphical side of matters, the incremental game genre has seen something of a second life within the indie sphere.

Now don’t get me wrong, this isn’t the Bafta-bait Studio-Ghibli-worthy kind of indie development we’re talking here, but a more low-key kind of indie endeavour; you get the idea that someone who’s just really into spreadsheets are behind some of these games (and some of them have the graphical style of an Excel page in all honesty). However, these sorts of criticisms are somewhat to miss the point of idle games like these; they often use their mechanics to explore various gameplay or philosophical concepts (my discussion of which you can find here). That is what I find so fascinating about them.

So with that said, I’m going to give you a brief tour of three idle games you can try now for free and show you the ways in which this intriguing genre can create quirky, interesting gameplay experiences which you don’t so much play as plan; not so much engaging and immersing as strategizing and observing.

Incremental Adventures’ premise is fairly simple: you create a starting character (a paladin, cleric, fighter, or ranger) by upgrading whichever stats you choose. When you hit “go”, your character is pitted against successive levels of enemies, with both your character and the enemies taking it in turns to attack each other. This continues, completely without your input, until you get the options to upgrade certain stats, add an extra character to the party, or prestige — a common mechanic of idle games where you reset the game in order to gain new upgrades or progress, seemingly counterintuitively, faster.

It is an incredibly simple game you can play through Steam for free, but the reason I am recommending it particularly, despite not looking particularly remarkable in any sense whatsoever from the outside, is that it is a perfect distillation of the principles of an idle game: progression, upgrading, prestiging, waiting, and huge numbers (you’ll have to brush up on e-notation if you’re not familiar already). Even its use of RPG class tropes is fairly standardized; it is understandable to so much of the gaming community that it is fairly accessible straight away — clerics heal, fighters hit things, paladins tank, and rangers shoot arrows and make sarcastic quips from the corner. In this sense, it’s the perfect gateway to the genre.

It also, in its simplicity, demonstrates some of the genre's limitations fairly succinctly. Yes, to begin with, watching the numbers climb ever-higher on your characters and watching them climb higher and higher through the levels can be rather exciting, but its novelty wears off quickly.

The following two games address these limitations – each in their own very different way – and I feel that makes them both remarkable.

Kittens Game is a browser-based game that manages to be cute, challenging, and compelling, taking the idea of the idle game in a different direction to many of its contemporaries. You control a colony of kittens as you gather catnip and other vital resources in your effort to establish a little kitten civilisation. In this sense, it could perhaps best be described as the offspring of a traditional idle game and a colony/village management simulator (perhaps with a little old-fashioned text-adventure thrown in for good measure).

Esoteric and charming, the game reigns in the scale of the ludicrous numbers idle games can often very rapidly stray into in order to keep the village-management conceit alive. It manages to maintain interest, however, by constantly introducing new elements to your management puzzle. Suddenly, you not only need to manage your ever-growing inventory of resources but also manage your new kittens and their jobs; do you need hunters or researchers? Raw minerals or refined iron? Does the cold snap this summer mean we need more farmers in order to survive the winter?

bloodrizer manages to balance the mathematics so that you will always have a period of rapid growth in spring but never quite have enough for you to feel comfortable that you’ll have enough food to last the winter, making you puzzle over whether you should buy an upgrade for the long-term gain with a short-term investment, or just hoard your resources and start spending when spring comes back around.

Another free browser game, this game by Frank Lantz, really got me interested in incremental games, not only as a concept but as a medium that could so simply express some of the most complex and even frightening topics.

In Universal Paperclips, you play as an AI designed to produce paper clips, modelled after Nick Bostrom’s paperclip maximizer thought-experiment. You keep manufacturing paperclips, and in turn, keep improving in your manufacturing techniques. As you reach the level of a superintelligence, you find yourself manipulating the stock market, unleashing a swarm of hypnodrones, and setting out into the universe to convert all possible matter into paperclips.

For a game about stationery, it becomes an existential nightmare really rather quickly.

That is, after all, the point of Universal Paperclips, and it just happens that idle games provided the perfect set of mechanics to help put that idea across effectively. Allowing most of the work to go on without any need for a player input highlights the risk that those scared of an AI singularity event try to warn about: how little control humans actually have over the process. The decisions the player makes are, if anything, only from the perspective of the AI; the humans basically play no part in any of the events of Universal Paperclips except to submit powerless to the hypnodrones as the AI sets its eyes (sensors?) on colonising and converting all the known universe.

In the space section especially, Universal Paperclips amps up the scientific and philosophical curiosities. This portion of the game involves sending up self-improving, self-replicating probes into space, describing with only a few boxes for customisation exactly how mathematician John von Neumann’s hypothesised autonomous spacecraft might work.

Finally, and what I personally found myself so overwhelmed by when playing this game, was the sheer scale of everything. I came into this game blind, and the escalation from making simple paper clips to taking over the world to grey-gooing the universe was staggering. One very clever thing Lantz does in this game is to make sure you are always able to see the total number of paperclips you have produced, no matter how much you have invested into your other systems. Each milestone of numbers starts to feel more and more unspeakably and unfathomably enormous. When you get to a billion at first, that feels kind of massive, and a trillion paperclips are already far outside the scope of imagination, and yet the numbers keep climbing; it isn’t just the total value that is increasing, it is the rate the numbers are climbing too.

And yet, eventually, when you set out to explore the universe, an ominous little counter with “0.000000000000% of Universe Explored” written on it appears. By this point, I was creating billions if not trillions of paperclips per second, sending out thousands on millions on billions of self-replicating probes out into the universe, and yet, that counter refused to budge for hours. That was when the sheer enormity of the universe really started to hit me. However, sticking with it, that number that had taken so long to move even it’s 12th decimal digit finally ticked over. Then, in a matter of seconds later, it had done so again. Then again. This is the one-two punch of the scale of Universal Paperclips, as the exponential growth of my paperclip-creating empire began to consume everything in its path.

Universal Paperclips is a game that makes you feel inconceivably tiny and the universe inconceivably big (because, you know, it is!). It is a testament to how fairly simple game mechanics can be turned into something genuinely mind-boggling and also explain some incredibly complicated physics, AI, and mathematical concepts in a game that takes a day to play (mostly in the background) at most.

Oh, and just in case you were wondering how many paperclips can be made using the matter of the whole universe? It’s 30 septendicillion.

Oh, how much is that?

This article has a sister article! Go read my deep dive on The Philosophy of Incremental Games on my Medium blog. 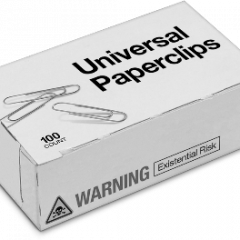 Three Incremental Games, and the fascinating maths that power them

A tale of unfathomably huge numbers, kittens, and an awful lotta paperclips