A review of short film One Small Step.

1. The story follows the ups and downs of a young girl's life on her journey to becoming an astronaut, from watching a rocket launch as a child and playing games about space with her father to studying astrophysics, losing her father, and eventually achieving her dream.

It's a coming-of-age story with equal amounts of optimism and realism, sensitively navigating the ups and downs of the protagonist Luna Chu's life, portraying her pursuit of a dream as one involving failure, rejection, and unexpected loss, while ultimately ending with a positive message: the journey to achieving your dreams may not be linear, but it can still end in happiness.

It employs a linear narrative structure, beginning with the exposition of a young girl enthusiastically watching a rocket launch. As the story progresses through multiple jumps forward in time, we watch her development through the different stages of her life. First, a bubbly child playing make-believe and dreaming of space. At this stage, she is animated with exaggerated features to give her a bigger smile and more emotive eyes, and with exaggerated movement in everything she does, giving the character an energetic and bubbly personality. The colours used are bright and simplistic, reflecting the childish happiness felt by the character at this point- this is reinforced by the use of a bright light or glow almost always shining on both Luna and her father, reflecting their positive emotional states, and upbeat music with childlike chimes and percussion.

We see her develop through her childhood, maintaining the bright colours, upbeat music and bouncy, exaggerated movement to show the continuation of the happy stage of their lives, until she becomes a teenager. At first, the animation techniques, mise-en-scene elements and music style used to show her childlike optimism are maintained, up until she receives her first failure on an exam.

As her so far endless optimism begins to falter, the media language used reflects this: suddenly, the music is slower and less upbeat, the colours of the settings and clothing become less vibrant, and her movements become slower and less exaggerated. The technique of having a bright glow shining on the characters to show happiness while she was a child is again used: this time, the light from her kitchen shines on her when she sits with her father to eat. Outside of the two of them, the colours used are dark and dull, showing that her respite from her decreasingly happy world comes from eating with her father.

The scenes with her father on his own, such as when he's fixing her shoes, break up the darker colour palette by maintaining bright colours and portraying his maintained optimism.

As she continues to get less and less happy in her life, and begins to neglect her father, the colours continue to darken and lose their vibrance , and the music continues to slow and become less and less upbeat. A bright glow shines on her momentarily as she posts her application to the 'Astronaut Candidate Program,' showing that she hasn't lost her dream even has her life has begun to dull.

However, after she is rejected, there is a sudden and much more significant decrease in the vibrancy and brightness of the colours used. The music is completely stopped, and the use of light is flat and dull. All of this is used by the creators to reflect the character's mental state.

After losing her father, the film is almost black and white, there is little to no light on screen, and the sounds used are sounds of anger or sadness, with no music, giving an air of hopelessness synonymous with grief.

Colour begins to seep back into the frame as she regains her optimism with a cyclical reference to the start of the film: finding her childhood astronaut boots. As she does so, she has the same bright glow shining onto her that was used throughout the shots of her childhood.

The clothing and settings become brighter again, the music kicks back in with a less childish, but still upbeat, melody, and the character's movements speed up again as she regains some of the happiness she had at the start of the film.

Brightness continues to increase until she gets accepted into the 'Astronaut Candidate Program,' at which point her face is coloured to almost give the effect that the acceptance letter is shining a golden light onto her face, showing the happiness it gives her.

A shot of a rocket taking off mirrors the first shot of Luna in the film, in which a rocket was seen taking off in the reflection of her eyes.

As she steps onto the moon, the technique of having a bright glow shine on the characters to show happiness is once again used, and flashbacks of her childhood with her father are cut in before a final glow slowly shines on her face, its source being the world itself, creating a feeling of reflective happiness on the film's final note.

I would highly recommend this film. It captured a snapshot of human existence in a deeply emotional and rounded way: the relatable experiences of failure, rejection, grief, and missing childhood were dealt with in an eventually optimistic manner with the overall message being that after going through all of those things, happiness can still be achieved. It definitely inspired me to see more films from these directors, and I thought the animation style was beautiful and cleverly employed to fuel the emotional side of the storytelling. 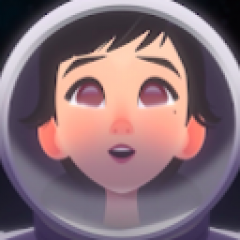 A review of short film One Small Step.