These days, ‘creative subjects’ are pushed aside as ‘less important’ subjects, including music. This sets the idea from a young age that music is not useful or essential, promoting an unhealthy mindset towards the creative arts.

Children's lives have changed almost beyond recognition within the last year, and now more than ever, we can see just how black and white their learning has become. I believe that for children, learning should be varied, allowing for the discovery of their individual strengths and interests. But it seems to me that learning now focuses solely on the grade, each child becoming data for an exam board.

Certain subjects have been brought to the forefront of the education system, pushing other 'less important' subjects into the 'other' category. Reading and writing are, of course, important, however, as Albert Einstein said: "Everybody is a genius. But if you judge a fish by its ability to climb a tree, it will live its whole life believing that it is stupid". The fact that this quote, and by one of the finest minds in history, has been around for so long and has not been applied speaks volumes about what is considered important for children’s learning. I am someone who talks a lot about curiosity, finding joy in learning new things and educating oneself, and I believe that this is not truly encouraged in schools. ‘Learning’ and ‘passing specific tests’ are two very different things.

Music has been pushed aside as an 'other', a less important subject, but I am here to say that for young children especially, this could not be further from the truth. Music is also essential for those with learning difficulties, a generalisation I loathe to make for there is no one way of learning, however strongly children are forced to believe otherwise. Music, being a universal language in itself, is something that children respond to, often before they learn to speak. So why is music regarded as an ‘other’, a non-essential subject? In a time of record levels of anxiety and depression in young people, one would think that children should be encouraged to understand their own emotions and express themselves when perhaps words and sums will not suffice. And this is not just in the case of children; music as a whole gives adults the chance to express things that cannot be put into words.

Do not just take my word for it. There is a science behind our relationship with music and how we respond to it as infants. Have you ever considered that our emotive part of the brain is directly wired to our understanding of musical harmony? Have you ever questioned why we refer to major and minor chords as 'happy' and 'sad'?

In an article by David Bakker and Frances Martin, it was found that: 'Pallesen et al. (2005) found that minor chords elicited greater activation than major chords in several brain areas implicated in emotional experience and processing, including the amygdala, cerebellum, brain stem, and retrosplenial cortex... suggesting that something is fundamentally different in the way that major and minor chords are processed for emotional connotations.' In another article, focussing more specifically on children's responses to harmony, Norman D. Cooke says: 'Musically-untrained children as young as 4-5 years also choose a “sad” face to match with a minor chord and a “happy” face to match with a major chord'. The findings of this research reveal how effectively music taps into our emotions and expression.

Nordoff Robbins is a charity which provides music therapy, notably as a learning mechanism for young children with learning difficulties. The best example I can provide that supports my argument for the importance of music is a video on their YouTube channel:

This video captures an interactive session with the charity’s founders, Paul Nordoff and Clive Robbins, and a small group of children. With Robbins on the piano, he improvises melodies, responding to the children’s lead as they each take a turn to beat the drum. This clip focuses on a little girl called Karin. When she takes her place at the drum, something extraordinary happens. I have been a musician all my life, singing and playing the piano from primary school, studying music at GCSE, A-Level and university, and I have never seen a drumbeat as steady as Karin’s!

Not only is her timing impeccable, but her tone and force of each beat is consistent and carefully placed. In the video, you can see the concentration and absolute engagement in her eyes. As Karin hears the melody progress to her beat, she very gradually slows down and gets softer, which Robbins responds to. Then she takes the lead herself and speeds up, which propels Robbins’ playing. The sense of mutual understanding and communication is fascinating to see; a skill that many adults would find challenging to navigate, yet Karin does this naturally. She seems to have such awareness, a quality that, were she in this session with many other students, she would top the class with.

As schools seem unlikely to hold music in higher regard in the near future, I encourage playing with music at home. This could be as easy as turning the radio on instead of the television, whether it be BBC Radio 2 or Classic FM. It could be finding interactive music lessons via CD or YouTube, or perhaps buying an inexpensive instrument such as a xylophone to play with (For sanity during these times, I would steer clear of the recorder!). It is so easy and inexpensive to incorporate music into your children’s lives, but the outcome will be priceless.

Music and Drama graduate from the University of Manchester.
Member of the Incorporated Society of Musicians 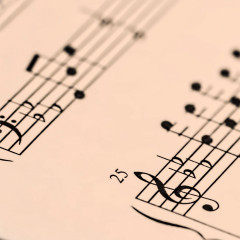 Why music is essential for young children

These days, ‘creative subjects’ are pushed aside as ‘less important’ subjects, including music. This sets the idea from a young age that music is not useful or essential, promoting an unhealthy mindset towards the creative arts.