Voice MagBlogsWhat do The Hunger G…

The critically acclaimed series not only has incredible writing, pace, and an engaging dystopia, but also many lessons to teach us.

The Hunger Games was released more than 12 years ago by writer Suzanne Collins and like many dystopian novels, contained a failed utopia, a totalitarian government and constant surveillance. But despite The Hunger Games' dark and heavy themes, it’s still captivating to its intended YA audience and the novel is still very prominent in pop culture. Some might suggest that the reason The Hunger Games – movies and books – still engage great numbers of young people is because hierarchical authority, lack of freedom, and forced conformity are all part of day-to-day life that teenagers put up with all of the time. And like many other YA books, the easy-to-follow story and accessible writing style hide depths of critiques of modern culture.

In the first book, Collins represents the class divide in the real world through the Districts: thirteen separated regions, each with a dedicated purpose. The Capitol is made up of civilians who live in luxury. They have access to the most advanced technologies and are obsessed with extravagant costumes and parties. When attending a party in the Capitol, protagonist Katniss learns that often these parties have so much food that drinks are served to make invitees throw up so they can taste more food. Coming from District 12, the coal mining and poorest District, Katniss is disgusted by the overconsumption and materialism of those living in the Capitol.

It follows that you could compare the Capitol, a rich area and its citizens that exploiting workers in other places to the divides between richer and poorer countries in our world. The Capitol are fascinated with games: a gladiator-style fight of children from  twelve districts, showing how the Capitol, and in extension we, construct violence and tragedy as entertainment. Capitol citizens annually watched the games, betting on the tributes and providing sponsorships and gifts for those in the game when they see fit. It seems like Collins is reflecting on the top-down nature of charity; providing gifts to the tributes is only treating the symptoms of their struggles.

The bloodthirsty eponymous Hunger Games pits the children from various Districts against each other in a game rigged against them, similarly to how kids must compete academically to ‘succeed’ in life in the real world. The children from the wealthier Districts have often been training for the Games, despite it being against rules, harking to the privileges of the elite and the intrinsic advantage they have in all aspects of life. The fact that poorer children are pitted against each other in a game that is rigged against them is similar to the divide and rule tactics that were common in colonial times.

Taking a closer look at The Hunger Games shows that the series is more reflective of our own society than we’d like to believe: and I definitely haven’t even covered the many many other points of comparison between our world and Collins’. But what’s even more interesting about these books is how prevalent the themes of anti-authoritarian struggles are. The movies and the book in particular highlight the necessary nature of struggle and governments afraid of youthful rebellion. After the Games, Katniss unintentionally becomes the symbol of a rebellion that has been brewing for 74 years. But Collins also makes sure to emphasise that Katniss does not want to take on this role or be the face of rebellion: she’s just trying to protect herself and her family, an anti-hero. Something about this instinct for preservation makes Katniss a relatable character despite her lack of vulnerability and emotion.

The mockingjay, a sort of fictional copycat bird, becomes the symbol for rebellion. The existence of the mockingjay was an accident: a cross between a mockingbird and the Capitol-created surveillance jabberjays. In District 11, the racialised agriculture District, the birds are used to signal the end of the day. Katniss and Rue, an allied tribute, use the birds to communicate. Later, when Rue dies, Katniss associates the bird with her and it becomes symbolic in the novel for not only Katniss’ personal desire for resistance but also for the general rebellion against the Capitol. Time and time again, we can see examples of these symbols – in recent history, Extinction Rebellion’s sand timer.

The death of Rue is a trigger event for a rebellion in District 11. In history, we can look to the 1955 arrest of Rosa Parks for refusing to move to the back of a segregated bus. This prompted a community-wide boycott in Montgomery which then led to further protests. Continuing this trajectory, the third Hunger Games book takes place during a full-scale rebellion, unlike the first two books which take place within the context of the Games. As the Games are explicitly used by the Capitol to show the District that resistance is futile, this marks a significant change in the story of the book. Conventionally dystopian literature seems to focus on the beginning of the end for the ruling party, instead of the very end, as this makes for the most interesting stories. But through the final installation to the series, Mockingjay, Collins proves that rebellion is hard fought: the book is much grittier, about situations that feel more militant and war-like. But the real message of the series is encapsulated at its climax. There are no winners in the war, not even District 13 who’ve defeated the Capitol and the President. Katniss isn’t happy at the end of the series, nobody is.

In The Hunger Games, everything becomes part of the entertainment – the personal relationships between tributes, the violence and even rebellion is simply used to evoke sympathy in an ultimately oppressive and apathetic audience. If you think about the series more deeply, it starts to get meta: maybe us, those consuming this media, could be the people of the Capitol. The movies and books did create huge profits for such a violent series with such a radical message. For such a mainstream series, The Hunger Games really does have a lot to say. The trilogy questions corrupt political power, undistributed wealth, capitalism, racism and it questions its readers too.

So, what does The Hunger Games teach us about resistance? During Hong Kong’s pro-democracy protests, Katniss’ words from the final book, were graffitied on walls and shouted at protests: 'If we burn, you burn with us.’ The phrase was later used as a title for a documentary film about the protest, ‘If We Burn’. The quote of a dystopian writer, whose dystopia was based on our society, then being used as a protest slogan in the real world and then finally leading to the creation of more art – it’s rather poetic. It seems in this way that life imitates art and art imitates life, in this strange cycle of back and forth, dystopian art versus dystopian reality. 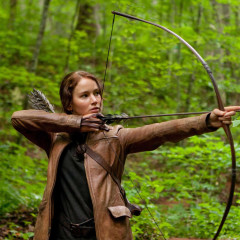 What do The Hunger Games teach us about revolution and resistance?

The critically acclaimed series not only has incredible writing, pace, and an engaging dystopia, but also many lessons to teach us.