Some good books for each of the not-so-good months of 2020!

To summarise this year, I decided to pick a book that I’ve really enjoyed in the past and recommend it based on the events of each month of 2020. There’s something in here for everyone, from cookbooks to the climate crisis. If you’re in need of some good books for the holidays, read on!

The Uninhabitable Earth: Life after Warming by David Wallace Wells

This is a tough one to read, just because it’s so packed with climate science and frankly terrifying predictions for our future. But there are some really useful pieces of data in here and if you need some facts about the climate, this is a great place to start.

We Are The Weather: Saving the Planet Begins At Breakfast by Jonathan Safran Foer

If you’re sure you’ll struggle with a facts-based, impersonal view of climate change, this might be the book you’re looking for. We Are The Weather is a very human and personal look into climate change and making the biggest change possible, filled with Foer’s own mental struggles and arguments.

A sort of alternate look on what a pandemic could have caused the world to look like. In retrospect, this book shows a worse world than what we’ve experienced in the last 12 months but it is interesting to look back into a world when worldwide pandemic wasn't the norm. The story is intricately woven and told from many perspectives, and there’s something in this book that feels very magical and theatrical.

This book complicates and simplifies cooking at the same: it gives you the tools to cook and then tells you to do it yourself. When the quarantine fever really began to hit, we all turned to sourdough and food for joy and this book tells you just how to step up your cooking.

Eat Up: Food, Appetite and Eating What You Want by Ruby Tandoh

Eat Up is the best of food writing, because it makes you so hungry and excited to cook with just a few simple words on a page. This is more of a proper read than Salt, Fat, Acid, Heat, which is a dip-in-dip-out type of book. Eat Up is also littered with references to pop culture and films, which is always a plus.

May: clap for our carers

Every Thursday evening in May, people leant out of their windows to show their appreciation for key workers. While there was some criticism about the government’s involvement in Clap for our Carers, the idea was started in the community and was intended to bring connection and joy. Similarly, Love From A to Z is a YA romance novel that just brings joy. It’s sweet, short and simple. It’s a positive story and for those feeling down, the perfect pick-me-up.

Natives: Race and Class in the Ruins of Empire by Akala

This book by musician Akala doesn’t require too much explanation; it’s a personal and simple exploration into race in Britain. The book is easy to read and understand and not too long. It’s the perfect starting place for anyone beginning their journey to understanding racism and empire in Britain. Akala really does have a way with words and if you haven’t heard of him, you should definitely check out his music.

The Knife of Never Letting Go by Patrick Ness

As things began to return to some sort of normal in August, I was reminded of an incredible YA science fiction/dystopian novel telling the stories of young people navigating a world full of chaos and danger. This is a really fast-paced, engaging story but it’s really meaningful and interesting. The story follows Todd Hewitt in a town of men whose thoughts are all projected out loud. He is forced to flee with his loyal dog and meets a silent girl. I would highly recommend this book to everyone, even if YA isn’t normally your favourite genre because it really is phenomenal.

This is a really sweet collection of short stories for any littles one in your life. The short stories about inspiration women are accompanied by beautiful illustrations by around 60 female illustrators from around the world.

This is an Uprising by Mark Engler and Paul Engler

In This is an Uprising, the Engler brothers argue there’s a formula to change and look to historic movement to prove their points. Drawing from movements such as Occupy, the Arab Spring, and Gandhi struggle for Indian Independence, this book looks at strategic nonviolent action. Mass movements are often portrayed as random, unpredictable events but this book analyses movement, from the sparks that start them to how far they change things.

You’ve probably already heard of this book because since its release back in 2014, people have been shouting about it. Sapiens is a one look over human history from an evolutionary, social view and often philosophical view. The blurb says that the book ‘challenges everything we thought we knew about being human: our thoughts, our actions, our power ... and our future’. It wouldn’t be an exaggeration to say that this book really shifted how I view the world and also how modern and sometimes irrelevant politics is to what it means to be human.

From What Is to What If: Unleashing the Power of Imagination to Create the Future We Want by Rob Hopkins

This book isn’t really festive— but it is hopeful. Hopkins’ has made an engaging read that also is an antidote to the scary and uncertain world. The book dives passionately into the idea of radical imagination and what we must do to revive and reclaim it. It’s thought-provoking and heart-warming and I would heartily recommend you to read this book over the Christmas holidays. It’ll certainly give you a boost for the new year and make you more positive about our future. 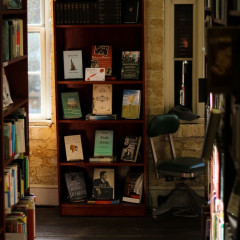 Some good books for each of the not-so-good months of 2020!