LGBTQ+ history needs to be remembered, but is instead often forgotten or purposefully erased. Here's a brief summary of the LGBTQ+ events in Britain in the past few hundreds of years.

LGBTQ+ history is an incredibly important part of British history,  yet it is something that is rarely talked about, even now. Many historical figures, such as Alan Turing, who is credited with cracking the enigma code, were completely abandoned by history because of their sexuality.  It is crucial to remember these pivotal moments and people, not least because of their achievements, ,but because the LGBTQ+ community should not be denied their history.

In 1533, the ‘Buggery Act’  was passed, which dictated that any man found guilty of homosexuality was to be punished with death. This was ammended nearly 300 years later in 1861, when the death penalty was replaced with a minimum ten year (but more commonly life) imprisonment.

In 1885, the law was changed to convict someone of homosexuality without any witnesses. As little as a single letter expressing affection from one man to another could be used as evidence. This law became known as The Blackmailer's Charter, as people could bribe gay men by threatening to have them imprisoned.

Up until this point all laws concerned gay men and their was never any legislation against women in same-sex relationships. The topic was debated in Parliament, as to whether restrictions should be introduced, but it was decided that it would be better not to draw attention to the “issue” for risk of encouraging more women to “try” homosexuality. However, while women were exempt from any laws surrounding their sexuality, soceity still ostracised those in a same-sex relationship. There were some women who openly acknowledged their sexualities and had relationships, such as Anne Lister, often known as Gentleman Jack, however they were subject to discrimination.

In 1967, “homosexual acts” were legalised, however only in private between men over 21. This meant even kissing a partner on the cheek or holding their hand in public was outlawed, because it was supposedly indecent. To protest this injustice, the first official UK pride march was held in 1972, with approximately 2000 participants.

Just as these defiant breakthroughs took place and society began to treat LGBTQ+ people with more tolerance, Section 28 was introduced. This was a set of rules introduced in 1988, which meant that authorities could not ‘promote’ LGBTQ+ topics, meaning schools could not teach acceptance of LGBTQ+ people. These changes fuelled discrimination, as they fostered the incorrect idea that being LGBTQ+ is wrong. The law was in force until 2003, which meant that LGBTQ+ people had to endure 15 years of this treatment.

In 2005, transgender people were finally given legal recognition of their gender through the Gender Recognition Act, which gave people a certificate allowing them to change the gender on their birth certificate. Only two options, male and female, were available, meaning many people with different identities were completely excluded. The system is still not ideal but in 2012 the term ‘Gender Identity Disorder’ was replaced with ‘gender dysphoria’, meaning transgender individuals are no longer diagnosed with a mental health disorder.

In 2013, same-sex marriage was finally allowed in Britain. However, this was only legalised in Northern Ireland in January 2020, less than a year ago. Even though same-sex marriage is now permitted in the UK, there are still everyday issues that are faced by the LGBTQ+ community. We can be proud of how far we have come but it is also crucial to understand that more steps need to be taken to achieve complete equality.

Trying (and barely succeeding) to be a writer, musician and seamstress, but definitely defying the expectations of people. Do what YOU want, not what others want. 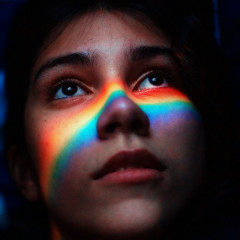 LGBTQ+ history needs to be remembered, but is instead often forgotten or purposefully erased. Here's a brief summary of the LGBTQ+ events in Britain in the past few hundreds of years.