Could universities become the primary source of live theatre during coronavirus?

As a 2020 fresher, I’ve had my fair share of lowered expectations. Yet the theatre scene at university has surprised me with its adaptability, persistence, and vivacity. We’ve had audio plays, Zoom plays, outdoor plays, socially distanced plays, single household plays – you name it, student theatre has thought of it. Even while the West End remained dark all through lockdown 2.0, student theatre was recording scenes online and holding self-tape auditions. So what has allowed student theatre to continue when so many other theatre groups were forced to close? And could the wider theatre scene take a leaf out of student theatre’s book, or are we about to witness its rise as a prime dramatic influence?

The first thing to consider is the fuel behind the student theatre fire. Student theatre has an enormous community – all in close proximity, all full of youthful eagerness – ready and able to be drawn upon in times of crisis. And students also have a lot of free time, as well as dedication to their societies. Of course, this is greatly aided by the increased freedom that universities experience from coronavirus measures. While many theatre companies struggled to find venues which were allowed to open, student venues were exempt from orders to close as they were part of educational institutes. Equally, while theatre companies were banned from meeting, student theatre groups, because they were defined as university societies, were still allowed to congregate. And while audiences were banned from attending professional performances, students were also still permitted to partake in university activities as spectators.

Therefore it is clear that student theatre has been liberated by its connection to universities, while still following social distancing within each production. But the benefits of having educational affiliations are still to be properly capitalised. The key to student theatre after Christmas will be universities’ access to lateral flow coronavirus tests, which produce positive or negative results in under two hours. Taken before every rehearsal and every performance, these tests will even safely allow for non-socially distanced productions.

All this may suggest that student theatre is in a unique position to rise up the dramatic ladder of prominence, but their exemptions from normal performance rules are not the only reason for their recent success. Student theatre has also been remarkably adaptable and creative throughout the pandemic.

They have relished in producing smaller but more numerous performances. They have adjusted expertly to the realm of online plays. Their one-man shows have found a niche market, their socially distanced plays have been produced with professionalism. Yet many non-student amateur theatre companies have not explored the opportunities presented by the challenges of coronavirus in such a way. And although the responsibilities of adult life, the hardships of a pandemic, and the lack of willing audiences can all be counted as serious barriers for these other companies, new forms of theatre, as showcased by students, could still be applied to the wider dramatic scene. A working mother can find time to record an hour a week of an audioplay, a distanced troupe can film one scene a week of a revue showcase.

So yes - student theatre has multiple advantages in the piloting of new, inventive, coronavirus-appropriate forms of theatre. But that is not to say their innovations can’t be adopted by other theatre groups. Still, student theatre has certainly been handed an opportunity to spearhead the theatre of the coronavirus age. Let’s just hope they continue to take it. 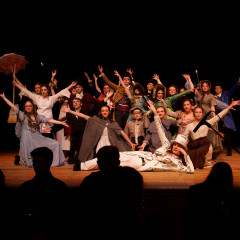 The new face of student theatre

Could universities become the primary source of live theatre during coronavirus?