During the XXth century, many women were involved in the arts -and in music, a lot of them worked as singers, composers, instrumentalists and writers. Still, they were struggling against the mainly male belief that they couldn’t take part in a Symphonic Orchestra or compose major works. Inspired by the urge to make every women musician take part in every area of this art in a professional and remarkable way, Marion Scott (violinist and musicologist), Gertrude Eaton (singer) and Katherine Eggar (composer) founded, in 1911, the Society of Women Musicians. The first meeting, held on June 15th 1911 at the Women's Institute (Victoria Street, London) was attended by 150 women.

Years after, in 1911, Marion Scott came up with the idea of bringing women from all areas in music together. They would discuss and write about key points in musicology, organise concerts, work in compositions and even have the most experienced of them give advice about musical careers. In the years active the society worked with a subscription system: professional musicians had to pay 15 shillings and 6 pence, non professional musicians £1 6s and men -who had to be proposed by a women member- had to pay 5s.

The SWM and the Suffragist movement

Despite the fact that a large number of members were associated with the Suffragist movement, the then head of the meetings, Katharine Eggars, made it clear that the society was not a suffragist organization, but had similar ideas.

A growing society and a promise for future generations

After the first meeting, by the end of the year they held six more, hosted six lectures and a composer's  conference, formed a choir and had given a concert presenting the music their members wrote. Eventually, the number of members ascended to 152, with 20 associates. The society  lasted 61 years, and saw generations of women fighting for their rights in music and being recognised for their contributions to this art. This society worked for years to bring down the misbeliefs about what women could or couldn’t do, gave them a voice and a place to grow artistically, and there is no doubt that it should get more recognised nowadays. If you are interested, do find out more about everything this association achieved -specially if you are in the arts-. The Royal Academy of Music has plenty of documents about the SWM in its internet archives, such as annual reports, lists of composers, letters and even their constitution and rules they followed!

The Society always had as members the most eminent composers of their time; and they all wrote beautiful pieces worth the listen -or playing:

Violin Concerto n2 in G minor (1890 approximately), by Ethel Barns: This is one of her many concertos for violin and Symphonic Orchestra, performed in concert for the first time by herself. The concerto was later arranged for violin and piano receiving very positive reviews.

In a persian garden (1896), by Liza Lehman: This is a song-cycle for four voices and piano (not a very usual combination at the time), based on the translations made by Edward Fitzgerald of Rubáiyát, by Omar Khayyám.

The Wreckers (1906) and The women’s march (1910), by Ethel Smyth: The first one is a three-act opera, with a libretto written by Henry Brewster, and considered to have influenced later works from other composers. Ethel Smyth joined the suffragette militants, dedicating years of her life to feminist activism. It was during this period that she wrote the suffragists' hymn, The women’s march. The records show that in 1914, Smyth stepped back from the society to dedicate to music only, after two years of activism and being sent to jail for throwing a stone to a minister’s window, and came back in 1922 to become an honorary vice-president. 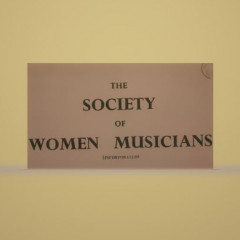 The Society of Women Musicians