I was tasked with drawing Mickey Mouse after watching a tutorial.

My mum found the Art Voice and suggested I joined it.  I was skeptical at first because I felt I was not good enough, but my mum soon convinced me.  I did my first drawing of Mickey Mouse on Friday, copying a tutorial on youtube, and found it really enjoyable.  I thought it was going to be quite difficult, but it ended up being extremely therapeutic.  The only parts I found difficult were the hands and the feet, which I had to re-draw a few times.  But in the end I got the look I was going for.  The colouring was a lot of fun, but it would have been cool to try and shade in black and white, which I hope I will have a chance to try in the future.  I like to use fabrics so I'm considering doing another Mickey, mixed media style. 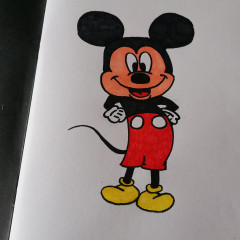 My first drawing for bronze award

I was tasked with drawing Mickey Mouse after watching a tutorial.