Reconceptualising education to meet the needs and wants of young people in the 21st Century.

2020 has been a year of radical change. Societal shifts and changes in mindset that often come over a period of years have been compacted into six months – a necessary move as Covid-19 continues to wreak havoc on the world.

The education system was already showing signs of strain before Covid-19 hit. Schools were having to reduce hours, teachers were forced to buy their own supplies for the classroom, and the emphasis on STEM has ripped a hole in the provision of creativity. It has increasingly seemed as though the system was a few years away from disaster.

That isn’t to say teachers haven’t been trying – my word teachers are some of the hardest working people around, and their efforts during Covid-19 to try and keep a sense of normality and uninterrupted education has been admirable. The issues facing the education sector seem to go deeper, and are symptomatic of a system that is built on a very archaic approach to education.

Much like with software, and how you accrue technical debt by simply building upon an old foundation rather than starting new, the education system has seen sweeping changes since it was formalised in 1918, but those foundations haven’t really changed in the 102 years since.

With parents having to quickly learn how to homeschool during lockdown, and teenagers having their whole futures decided (and horrendously botched) by algorithms, 2020 in particular has been a true test of the education system, and even now things aren’t back to ‘normal’.

We at Voice want to seize this opportunity to reimagine what education could look like in 2020 and beyond. Freed from the burden of budgeting and implementation, we want to take a comprehensive look at what works, what doesn’t, and what needs to be changed to create a 21st Century education system that is inclusive and progressive.

We will look at the curriculum, introducing new subjects and refocusing the subject matter in those that exist. Building resilience, encouraging problem solving, and teaching children about mental health should be made a priority. A more honest and less rose-tinted view of Britain’s historic role on the global stage could be introduced, to better contextualise the conversations we’re now having around Black Lives Matter and slavery. We’ll look at school policies, including uniforms and punishments, and even question the necessity of being in a physical building every day.

So join us as we spend the next few months exploring what education could – or maybe should – look like in the 21st Century. We also invite you to propose your own ideas on how you’d change school. It could be one little thing, such as the start and finish times, or something more drastic like making school a three-day week and embedded work experience into the curriculum. Perhaps you’d like to see environmental studies become a mandatory subject, or exams be replaced by project-led work?

To join the conversation, just tag your posts ‘voiceschool’. 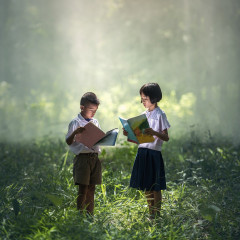 Reconceptualising education to meet the needs and wants of young people in the 21st Century.