There is no doubt about it – exams were a mess this year. From the news of their cancellation on 18 March, to their algorithmic unfairness on 13 August, to their last minute U-turn on 17 August, there has never been a set of grades which have changed so rapidly and seemingly arbitrarily.

For many students, 18 March was the day we knew that coronavirus would impact us personally for years to come. “Ah, so you were the Covid year of A-levels”, we could almost hear the voices of future employers whispering across the decades. Nobody looks forward to months of revision, and nobody looks forward to cramped hands from writing, tired eyes from reading, stiff shoulders from hunching over a desk all day. But, as a Year 13 student myself, I have to admit that the alternative hasn’t been exactly satisfactory. After all, there is an undeniable amount of pride which comes from working hard and receiving results that you alone are responsible for. And while binging Netflix was preferable to essay writing, the mess that was made of results makes me think that perhaps the essays would have been worth writing after all.

On A-level results day, while the overall rate of As and A*s were up by 2%, this improvement was not felt across all schools. Independent schools saw the greatest improvement on last year – up 4.7 percentage points – while academies, comprehensives, and colleges saw only between a 0.3% and a 1.7% increase. Clearly the A-level algorithm did not favour all students equally. Worst of all, it took several days for the government to declare that appeals would not cost those disadvantaged by the system.

Naturally, the levels of disappointment and outrage on 13 August were high. But the government’s decision five days later did not solve the problem. Instead, upon announcing that Centre Assessed Grades alone would be used as A-level grades, a whole new host of problems arose. 36% of grades were increased, and universities were forced to accept more students than ever before. Students who had accepted their insurance universities were suddenly waiting to hear if their firm choices had enough room for them. Some universities, such as Durham, even started offering money to students to defer their places. Meanwhile, universities usually filled through clearing became desperate for more students. And everyone – even those who benefitted from the government U-turn – felt that their grades had been devalued by the sudden lack of government standardisation.

So if A-level results this year have taught me anything, they’ve shown me that even the most definite things in our lives can change at the drop of a hat. They’ve shown me that classist prejudices are so ingrained in our society that they can affect even supposedly objective algorithms. On the other hand, they’ve also shown me that the government can listen to protests against inequality, and can change their policies accordingly.

Of course nobody is to blame for the cancellation of exams. But the way that the government handled the situation failed to provide stability and security for thousands of students teetering wildly in the middle of a pandemic.

The anticlimactic feeling of my year group won’t disappear anytime soon. And, oddly enough, I wish I had been given the chance to take my exams. And that, if nothing else, proves that Covid really has inverted normal life beyond belief! 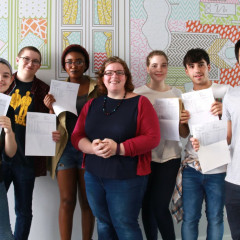