Diving into the vast history of school: in Britain and all over the world

The 1870 Education Act stands as the very first piece of legislation to deal specifically with the provision of education in Britain. It set the framework for schooling of all children between the ages of 5 and 12 in England and Wales. Education was then made compulsory for children by a further Education Act in 1880 between the ages of 5 and 10. It wasn’t then until 1944 that the ‘Butler Act’ introduced free secondary education for all. It was designed to be a national system, locally administered.

Today, seventy years on, we have a very centralised system of school. Compared to almost anywhere in Europe, English education has far more centralised authority. You can see this through, for example, the installation of a powerful school inspection system like Ofsted. Funding does not come through localised systems and instead most authority is held with the government and the Secretary of State for Education, which is currently Gavin Williamson.

Another aspect of centralised education is the national curriculum used in state schools. Throughout the 1940s, 50s and into the 60s the Ministry of Education did not interfere in the specific curriculum of individual schools. In fact, in 1960 the National Union of Teachers (NUT) said: ‘In this country the teacher has the inalienable right to decide what to teach and how to teach it’. During the same period, the selection of ‘academically gifted’ children to attend grammar school became increasingly controversial. Critics on the left attacked grammar schools as elitist because a student had to pass a test at age 11 to get in, however no changes were made. These perspectives about the centralisations and access to education have shifted completely over time.

The British schooling system is ingrained with social division. The so-called ‘factory model’ of education believes that introduction of mass schooling in Britain was encouraged by industrialists, as it readied large groups of young people to work in factories. This was through repetitive work, bells, punctuality, discipline, and obedience to authority. On the other hand, the upper-class white community continued to send their sons to generously funded private schools, where they had access to better resources and connections, allowing them to better prepare for life as an elite.

These inequalities continue on today. Only around seven per cent of the UK population attends private school but around 29% of MPs are privately educated. The Sutton Trust found that 65% of the most senior judges in England and Wales went to an ‘independent’ school. Even within individual schools, classism presents itself in various ways. This could be through judgement of people’s clothing, speech, their parent’s jobs, and what gadgets their parents can afford.

Poverty affects performances in schools in a multitude of ways. There are many studies in the physiological effects of poverty on child development, but even more clear is the effects of hunger on education. In a survey conducted by the National Education Union, a respondent wrote ‘Some students have mentioned that they have not had any food for two days, some come without having breakfast and with no dinner money but are not on free school meals,’ Hunger and malnutrition affect a child’s ability to concentrate, to learn new information and to progress in their education and development. In turn, privately educated children are more likely to have stable households, regular meals, and access to extra books and resources when needed.

This year's algorithm based A-level results demonstrated the difference between private and state schools. The statistics show that 85% of low socio-economic status students were predicted to achieve a C or above. In reality, only 74.6% achieved this – a drop of 10.4%. In private schools ‘A’s were up by 4.7% in private schools but only by 0.3% in sixth form colleges. The algorithm was based on the each exam centre’s previous performances and depended on the size of the cohort. The smaller the cohort entered for a subject, the less the grades were affected by the algorithm. Analysts from the education research company, FFL Datalab, estimate that independent schools enter 9.4 students for each A-level subject on average. For state-funded schools, the average is 11 pupils and for colleges, 33. So it makes sense that private school students were more likely to get their teacher-estimated grades. And if the results were meant to be a reflection of previous performances, doesn’t that just prove that the disparities between private and state education are more prevalent than ever?

A more global look into the schooling history leads to a completely different side of education establishments: residential schools. When colonial expansion took place, foreign forces would often use school to consolidate their rule and subjugate the people and future generation. By controlling schools, colonisers were able to preserve the status quo, train a limited number of mid-level bureaucrats, limit the growth of nationalism, and often impose their culture and language. This was especially apparent in the Canadian Residential school system where Indigenous youth would be forced to ‘culturally assimilate’ – each child would be given Christian names, their traditional hair would be cut and they would be punished if they were not speaking English. In Canada alone, over 6,000 children died within residential schools, which is 1 in every 25 children who attended. These techniques were used all over the world to suppress resistance and were born out beliefs that Western knowledge, culture and lifestyle were superior.

These schools still exist, in some capacity, today. In Africa and Asia, an estimated 2 million indigenous children attend ‘factory schools’ where they are cut off from their homes, family, language and culture. These schools are supported by education aid projects, which overtly aim to help children ‘escape’ to a ‘better life’ – despite mounting evidence of the environmental, social, and mental health costs of our own modern consumer lifestyles. The children who exit these schools are expected to join the global economy, which primarily benefits the industrialists and companies that push for them to exist. One residential school in India, named KISS boasts it is ‘home’ to 27,000 Indigenous children and states publicly that it aims to turn ‘primitive’ tribal children from ‘liabilities into assets, tax consumers into taxpayers.’ The children in these schools are taught their cultures and knowledge are inferior and backward.

Schools are important to young people and incredibly vital to shaping the future of our world – and that’s why it’s so important to look at them through a critical lens. This is just a brief selection of the history of modern school but there’s so much to think about. I haven’t even touched on the specifics, like the detail of our current British curriculum or the way we learn in schools. As school begins again and we return to routine, I believe we need to think deeply and question everything we know about schools. 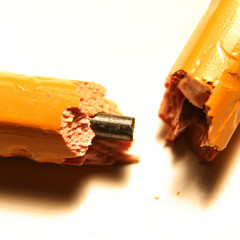 Diving into the vast history of school: in Britain and all over the world