The future is close, but not here yet

I have just come from the VR session at Mozfest, and I was lucky enough to try the new Oculus Rift.

To try and explain what I saw is difficult. I don't think words would really capture the amazement and disorientation I experienced. I have read plenty about Oculus, and VR in general, but nothing really prepared me for the experience.

The tech demo I tried out was a short series of completely 360 degree videos, jumping from a helicopter, to a speedboat, to a quad bike, to a beach, just to name a few locations. It was very cool to watch. Watch isn't the right word though, as it is more than just watching. I was able to look around, turn my head and my point of view changes with me. Very impressive stuff.

This being said, it wasn't perfect. The resolution was quite low, with visible pixels. Given the complexity of what was being shown, it shouldn't have been an issue, but I think my eyes have been spoilt by high resolution displays of laptops and mobiles. This certainly felt like a step back.

The reason for the low resolution, I was informed, is to try and provide a more stable frame rate. I personally experienced a lot of tearing and blurring of the images as the hardware tried to keep up with the demonstration.

Oculus is an incredible example of the future. I can imagine gaming will benefit incredibly from the work that Oculus, Steam, HTC, Microsoft (to name a few) are attempting. But it certainly isn't there yet, and I think people will choose resolution of immersion at this stage.

Below is a video of Community Coordinator Sally having her mind blown by VR, and a first impressions video after. 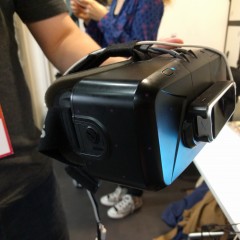 The future is close, but not here yet