What is mutual aid and why is so important?  I take a deeper dive into this emerging trend and ask whether they should become the new normal?

Dotted around my local streets are hundreds of rainbows, taped to windows, and attached to trees. A few roads away, there’s even a rainbow stapled to a scarecrow. These colourful outbursts initially seemed to be an extension of the Thursday evening clap, a weekly event that many criticised as a performative show of gratitude for ‘key workers’. And while I completely understand the cynicism, I can’t help but think that rainbows and clapping goes beyond Boris Johnson outside 10 Downing Street. I think the rainbow has grown to symbolise something bigger than this — the power of community and collective work.

Despite the UK being one of the world’s largest economies, over one fifth of the population live in poverty. The ‘end’ of Covid-19 isn’t going to be the end of this crisis; job losses, hunger, poverty are all going to increase when the economic backlash of the crisis hits the UK and the rest of the world. According to a new study, around 6.5 million jobs could be lost in the UK alone. It’s clear that the aftermath of the pandemic will affect everyone around the country, in a different way to the pandemic. These facts make the future seem pretty bleak and while the next couple of years are going to be tough, one thing sparked by the pandemic does give me hope: mutual aid groups.

Mutual aid groups are self-organised people setting up groups to help local communities. This includes doing shopping, getting medicines, or just speaking to isolated individuals. Many groups are coordinated through Facebook or Whatsapp groups and some groups pool money to help each other out. Mutual aid groups are used to fulfil the material needs of locals, meaning they’re more directly focussed on individual problems and requirements than councils, big charities or the government. Mutual aid’s speciality is that these groups are local and are less structured than conventional charitable organizations. They don’t rely on top-down leadership and are full of small numbers of committed volunteers.

A study done in 2018 concluded that 68 per cent of respondents described their neighbours as ‘strangers’ and 73 per cent said they didn't even know their names. So many Britons were isolated from their communities even before the pandemic began. But with this new movement, strangers who live across the road are connecting. Over the last four months, thousands of mutual aid groups have popped up across the country and while the rainbow drawings and weekly claps have sparked criticism and outrage by NHS and others, they do show that a small contribution from everyone can create something massive.

I remember an assembly I had in the gym hall of my primary school. To teach us about teamwork, one of my classmates was given a stick and asked to break it. Of course, with little force, the stick was broken. Then, the kid was given a bunch of sticks, tied together with a thin elastic band and asked to try again. The sticks were passed around to everyone but no one could manage to snap them. The assembly was meant to teach us that working together makes us much stronger than working on our own. I think that this can be translated to navigating the coronavirus pandemic — if there’s one thing we’ve learnt, it’s that we’re all in this together. The next couple of months and years are going to be tough, but if our local communities have our backs, we’ve got a better chance of making it through.

Research by the New Local Government Network (NLGN) has found that a huge proportion of people shielding during the pandemic were directly supported by local volunteer groups. Our response to this crisis shows us that positive change can happen and that local communities have the energy and power to provide support networks in times of crisis.

We’ve got to create more of these networks but also look to sustain them; until the end of this crisis and beyond. We’ve only tapped in a tiny amount of the potential power of communities that function without influence from governments, policies and politicians.

The future is looking more uncertain than ever and the only way we can weather the storm is together.

Find out more about mutual aid groups here and what groups can do here. 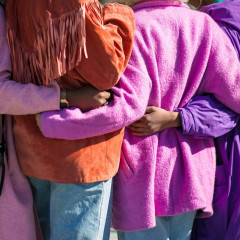 What is mutual aid and why is so important?  I take a deeper dive into this emerging trend and ask whether they should become the new normal?