Today (June 28th) marks 51 years since the infamous Stonewall riots. Stonewall is extremely significant in LGBTQ+ history because the riots are considered to have ignited the gay liberation movement and resulted in the first Pride marches being held on Stonewall’s anniversary in 1970. Whilst the Stonewall riots are considered the impetus of the gay liberation movement, many protests and public demonstrations advocating for gay rights had already taken place across America. Below are six lesser known LGBT uprisings which took place in the USA before Stonewall.

A decade before the Stonewall riots, in May 1959, police attempted to arrest several people, including novelist John Rechy, at the Cooper Do-nuts café in Los Angeles, a popular hangout spot for transgender people. Other customers began throwing coffee, cups and rubbish at the police, until the police left the café without the detainees in their car. The riots spread into the neighbouring streets, causing police to block off the street for the night and arrest more rioters. This riot is believed to be the first gay uprising in the USA.

Organised by Randy Wicker, gay men and lesbians along with straight allies picketed the Whitehall Street Induction Center after the US military violated the confidentiality of gay men’s draft records. This event is recognised as the first public gay rights demonstration in the USA.

The Council on Religion and the Homosexual Ball (1965)

The Council on Religion and the Homosexual was a San Francisco-based organisation formed in 1964 to establish a dialogue between homosexual activists and religious leaders. The Council held an extravagant drag ball on New Year’s Day 1965 to raise money for the new organisation. The San Francisco PD agreed not to interfere, but on the evening of the ball, the police shone klieg lights on the hall’s entrance and took photos of the attendees. The next morning, clergy leaders held a press conference to denounce police harassment of homosexuals. This incident is often described as San Francisco’s Stonewall.

In the 60s, the New York State Liquor Authority banned homosexuals from being served alcohol in bars and restaurants. Activists Dick Leitsch, Craig Rodwell and John Timmons, members of the Mattachine Society, staged a “Sip-In” at Julius’, announcing they were gay and asking to be served, to which the bartender replied “You’re gay, I can’t serve you”. With help from the American Civil Liberties Union, the Mattachine Society challenged the New York liquor rule in court and the courts ruled that homosexuals should be able to peacefully assemble, despite previously saying that the presence of gay clientele meant the bar was operating a disorderly premise. After this, a new era of licensed, legally operating gay bars began.

In 1967, undercover LAPD raided the New Year’s Eve party at the Black Cat Tavern. Several customers were arrested and injured, and a bartender was hospitalised. A month later, on February 11, 200 protesters picketed in front of the tavern. This was the first time LGBT people had organised a public demonstration against police harassment. The Black Cat Protests inspired Richard Mitch and Bill Rau to create ‘The Advocate’, the USA’s first national LGBT newspaper.

LAPD told Lee Glaze, owner of gay bar The Patch, that to stay open he must ban drag acts, physical contact and men dancing together. However, Glaze instead warned his customers that he’d play ‘God Save the Queen’ whenever undercover cops were present. Despite Glaze’s attempts, in August, LAPD raided the bar and arrested two men for “lewd conduct”, however, The Patch remained open. This was one of the first times that a gay bar had survived the aftermath of a police raid. After buying flowers from a nearby flower shop, Glaze and a large group of Patch patrons travelled to the police department, adorned it with their flowers, and bailed out the arrested men.

At this important point in history, with Black Lives Matter protests taking place all over the world, instead of diminishing the power of protesting, it is crucial to recognise how uprisings throughout history have positively impacted the lives of marginalised communities, such as how these protests have managed to liberate queer people for generations to come. 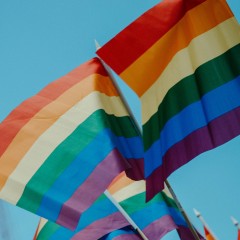 The uprisings that preceded Stonewall